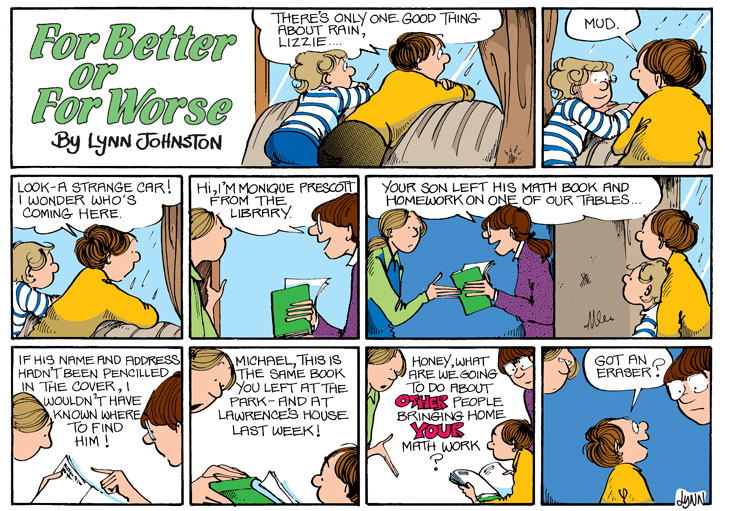 In Books: In The Beginning, There Was Chaos
Daily or Sunday: sunday
Items: book, homework

In Books: It's All Downhill From Here
Daily or Sunday: daily
Items: book, shelves

In Books: It's All Downhill From Here
Daily or Sunday: daily
Items: beer, pitcher, wine glass 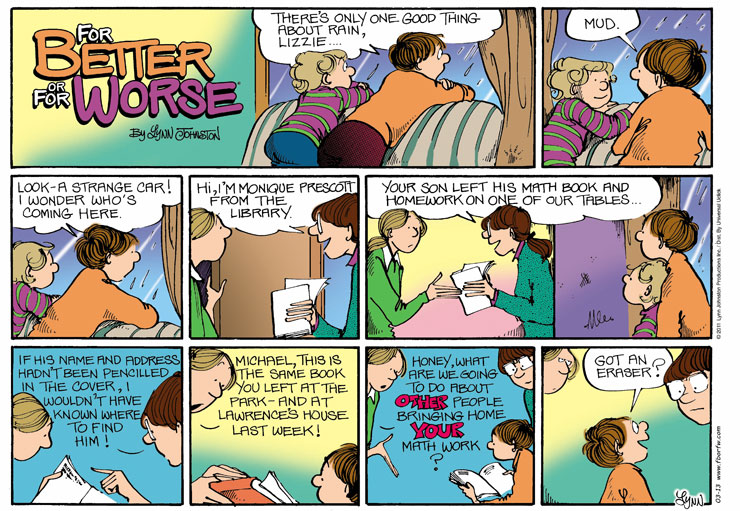 Lynn's Comments: During the 80's there was a Canadian television "reality" type show called "Thrill of a Lifetime". A young woman from Montreal had written to the producers to say that her thrill of a lifetime would to be to appear as a character in For Better or For Worse. I thought it was a fun idea and agreed to participate. The TV crew contacted me and asked if it would be possible for her to visit me at home and to watch me draw the comic strip in which she appeared. This was OK, too! Monique was a librarian, and so a scenario involving the local community library was concocted. Travelling all the way to Lynn Lake Manitoba was quite a hike from Montreal and when she arrived with camera crew in tow, she was exhausted, nervous and wired. She was to come to the door, wait for me to open it and then the two of us had to be surprised and happy to see each other. This we did many times! Finally, they allowed us to hug and laugh and enjoy the fun of connecting for the first time. I thoroughly enjoyed meeting this sweet, enthusiastic young woman. With her ready smile, thick hair and glasses, she made a fine cartoon character! She stayed for the day, I drew the strip, we had dinner together and she left the following morning. We promised to keep in touch - which we did for awhile. I later met her for dinner in Montreal, but our time together was interrupted and I regret not being able to get to know her better. So, you have the real story behind this strip...and, Monique, if you're still in Montreal, I'd love to hear from you and find out what you've been doing after all these years!

In Books: In The Beginning, There Was Chaos
Daily or Sunday: sunday
Items: book, homework

Lynn's Comments: Monique was a sweet young woman who won a trip to Lynn Lake to meet me, on a show called Thrill of a Lifetime. I was the "thrill!" Part of the arrangement was that she would see herself in the comic strip and receive an original drawing. Because our encounter had been so short and I had done just one drawing for the show (a Sunday page), I decided to include her as one of the library staff. I never heard from her, but I hoped she enjoyed her brief appearances.

Lynn's Comments: The great Johnston yard sale was an epic event. Everyone in Lynn Lake knew that Ruth had squirreled away some fine stuff and looked forward to seeing what would be up for grabs. Tables had to be borrowed from the church next door. It took us two days to price everything and set it out on display. As luck would have it, the event took place on the day of the high school graduation. Students in their best duds crowded around the tables, trying to score a deal ahead of the old guys.

Lynn's Comments: The town's mine was closing and many people were forced to move. Despite the fact that we were all trying to downsize, Ruth had a fantastic turnout--her sale was like Christmas and Halloween and everyone's birthday rolled into one. If you didn't want or need a thing, you had to be there--it wasn't just a sale, it was an event! In typical Ruth fashion, she provided an assortment of homemade goodies--she was a great hostess. In the end, her hard work paid off!

Lynn's Comments: When the stock began to run low, we ran home and dug through our own stuff--even though we had already sold everything we wanted to get rid of. Ruth and Tom went back into their house and did the same.

Lynn's Comments: When the dust cleared we did discover a few things gone that we wanted to keep--and one item had been stolen. Not bad for a day of chaos!

Lynn's Comments: I forget exactly how much they made, but the image of Tom, the family accountant, tallying up the take will stay forever. He meticulously stacked and sorted every coin, smoothed and organized every bill, and is the only person I have seen (other than the senior vendors in Vancouver's China Town) use an abacus!

Lynn's Comments: Any time I have done a presentation and felt that I had screwed up terribly, I think about the times when I have had to cover for someone else. After I leave the stage, my head spinning with "Why did I say that?" or "How could I have forgotten such an important point?," I simply say to myself, "Well, at least I showed up!"

Lynn's Comments: As one of the few female syndicated cartoonists, I was often asked how I was treated by the men in the profession. Like every other woman, I'd been targeted (by a few people) with the usual crap and I learned to live with it. My revenge was to do a better job than my detractors.

In Books: It's All Downhill From Here
Daily or Sunday: daily
Items: book, shelves

Lynn's Comments: I was often asked to champion women's rights in the strip; to reinforce feminism. I never felt comfortable with the word "feminist "; it's a word that to me suggests a negative attitude towards men. Rather, I preferred the word "equalist, " and I thought Elly and her friends were smart and independent and funny enough to show they were indeed equal to the men.

In Books: It's All Downhill From Here
Daily or Sunday: daily
Items: beer, pitcher, wine glass