In Books: In The Beginning, There Was Chaos, Is This One of Those Days Daddy
Daily or Sunday: daily
Neat Stuff: Lynn's favourite sound effect
Items: bunny 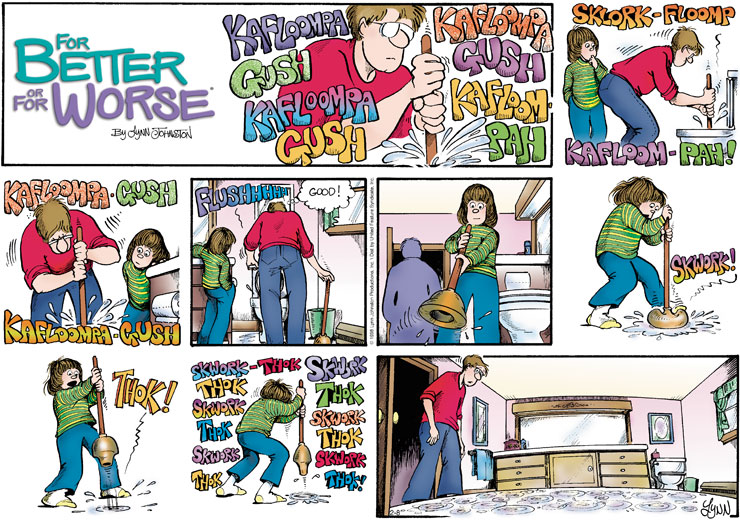 Lynn's Comments: "Kafloompa- gush, kafloompa-gush" is my all time favorite sound effect. Coming up with words that suggest things like the screaming of brakes or the rumbling of thunder has been a sort of "art form" with cartoonists often claiming ownership. I was once accused of swiping Don Martin's (Mad Magazine) sound effects. I think the noises I came up with were "ka-thwanggg" or "ga-fwappp" or something like that. Perhaps these words were similar to Don's - but I hadn't stolen them! In the English language, there are only so many ways to spell the sound of a cream pie hitting the side of a head or a mouthful of cold peas being spat onto a plate. Years ago, I saw an article about Rice Crispies and how "snap, crackle and pop" was written in other languages. Some of the examples were: "knisper, knasper, knusper", "rix, rax, rox," and "piff, paff, poff" none of which I thought were as descriptive as the English. So, cartoonists will continue to come up with written sound effects as long as there are images that require them and if anyone should choose to incorporate "kafloompa-gush" into their art, I will consider it, with humility and gratitude, to be a genuine compliment.

In Books: In The Beginning, There Was Chaos, Is This One of Those Days Daddy
Daily or Sunday: daily
Neat Stuff: Lynn's favourite sound effect
Items: bunny