In Books: In The Beginning, There Was Chaos, Just One More Hug
Daily or Sunday: daily
Items: apple, typewriter 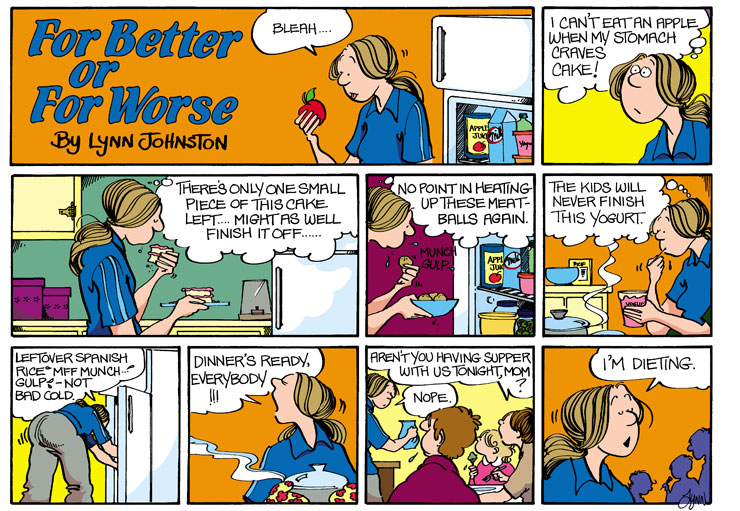 In Books: It's All Downhill From Here
Daily or Sunday: daily
Items: apple, newspaper 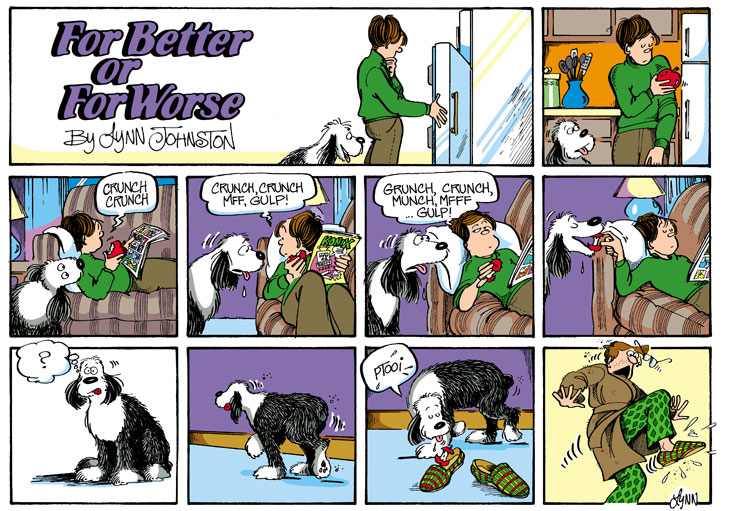 In Books: If This is a Lecture, How Long Will it Be?, It's the Thought That Counts, Remembering Farley
Daily or Sunday: sunday
Items: apple, comics, fridge, slippers, utensils 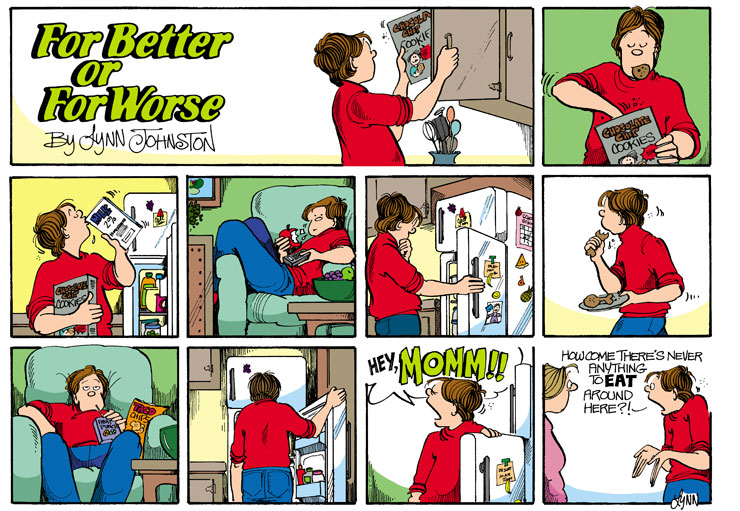 In Books: Things are Looking Up
Daily or Sunday: daily
Items: apple, carton of milk, jockstrap 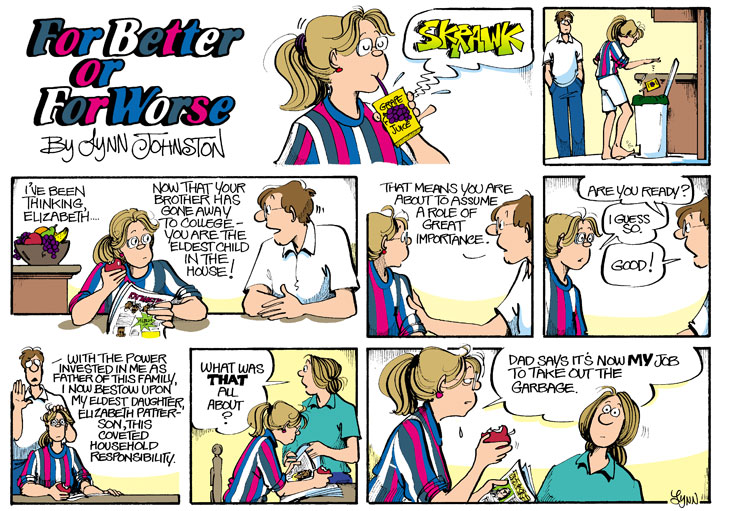 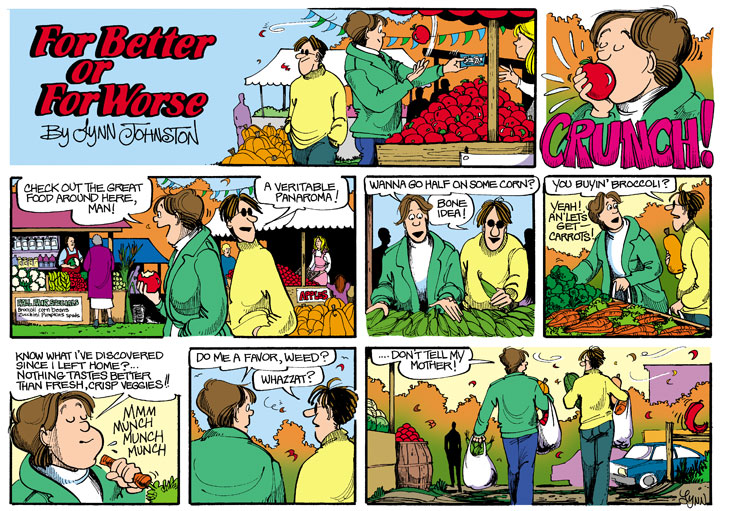 In Books: Love Just Screws Everything Up, The Lives Behind the Lines
Daily or Sunday: sunday
Items: apple, carrot, farmer's market

In Books: All About April, Graduation: A Time For Change
Daily or Sunday: daily
Items: apple, lunch bag 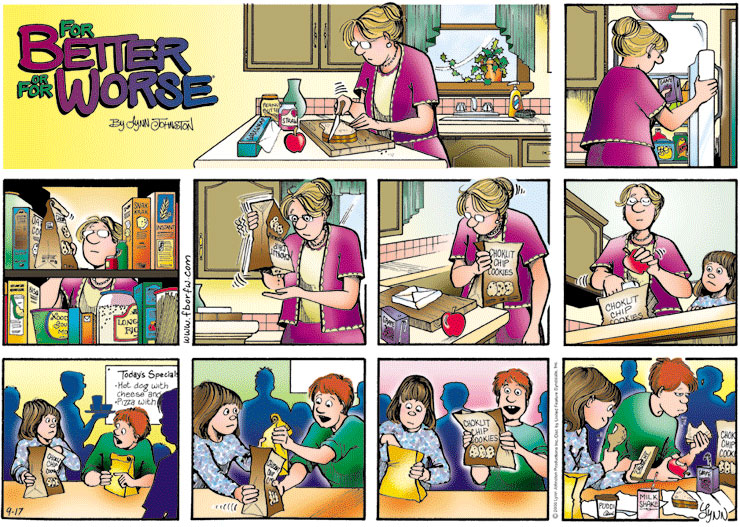 In Books: With This Ring
Daily or Sunday: daily
Items: apple, mirror

Lynn's Comments: This is what life was like when I was focused on my work. Time disappeared when I went into the world of For Better or For Worse. Aaron and Kate were used to waiting for me to come back to earth. In the meantime, they learned to be self-sufficient.

In Books: In The Beginning, There Was Chaos, Just One More Hug
Daily or Sunday: daily
Items: apple, typewriter 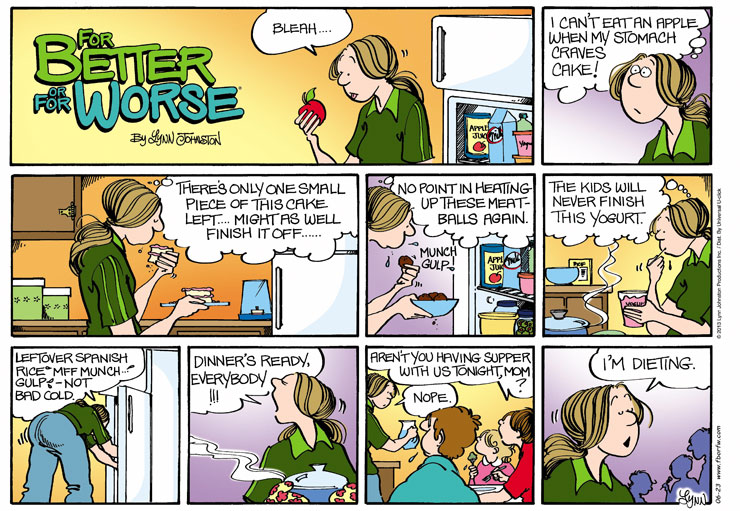 Lynn's Comments: POP!!!! The piercing gun made the first puncture in Kate's right ear lobe. She winced, blinked, looked straight at me, and howled! Her brother was delighted. When she'd regained her composure, Kate refused to have the left ear pierced. She'd had no idea it would hurt so much, and wasn't about to go through the procedure again. We had a problem. She could have the first stud removed so the ear could heal over, she could live with one pierced ear, or she could put up with another "pop" like the first one. Kate's tantrum continued. Mr. Roberts suggested we go home, think it over and come back later. The three of us left the building. Katie walked ahead with Aaron who pranced with glee at his sister's dilemma. Half way down the street, Kate suddenly turned and pulled me back in the direction of the store. "Let's do it." she said. The second stud was placed without a fuss, and off we went to get ice cream and groceries. "What made you change your mind?" I asked her. "He did." she said flicking her thumb in her brother's direction. "He was enjoying this too darned much!"

In Books: It's All Downhill From Here
Daily or Sunday: daily
Items: apple, newspaper

Lynn's Comments: I rather liked this one. Not for the gag--I just wanted to use the name, "Nedwitt."

Lynn's Comments: My mom made bread every two weeks. Being a kid, I figured I was missing something by not having store-bought Wonder Bread, and eagerly traded my school lunch with friends. The weird thing about the commercial bread was that you could press it flat and fold it up like cardboard. It tasted like cardboard too unless you put lots of margarine on it. (Few families could afford butter.) One of my friends made his own lunch every day, and the things he found to press between slices of bread varied from garlic cloves to dill pickles to just plain sugar.

Sometimes I traded with him, sometimes I didn't, but I was always envious of his store bought bread and the way he was allowed to make his lunch any way he wanted to. What we didn't know about each other was that my mom couldn't afford to buy commercially made bread, and his mom went to work before he got up. He had to dress himself and his brother, make both their lunches, walk his brother to a neighbour's house, and then get himself to school. With nutritious meals to look forward to and a mom who was home to look after me, I was the lucky one. 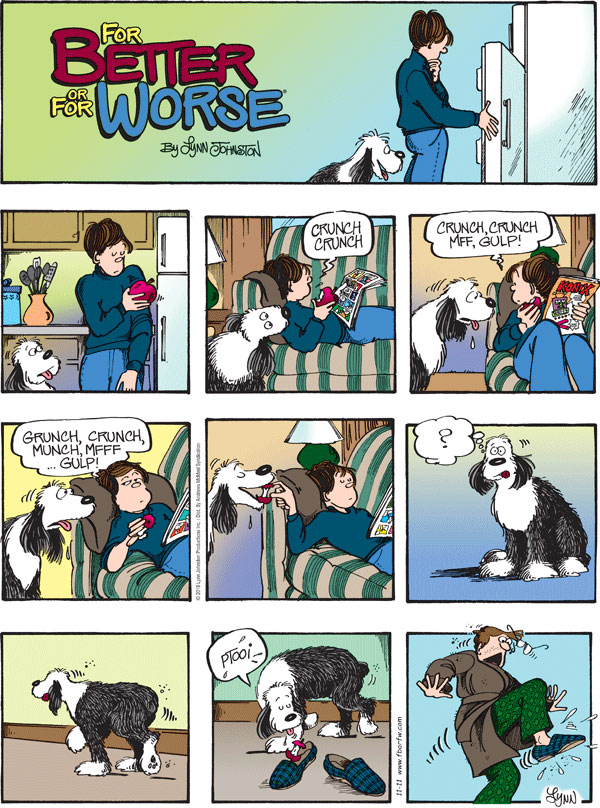 In Books: If This is a Lecture, How Long Will it Be?, It's the Thought That Counts, Remembering Farley
Daily or Sunday: sunday
Items: apple, comics, fridge, slippers, utensils

Lynn's Comments: In order to be up to date, I read books on pregnancy. I became very aware of how many weeks along Elly was and how she would be feeling. If you start to think about these things, you start to feel them yourself. The idea of cravings made me want to buy stuff I didn’t ordinarily buy. 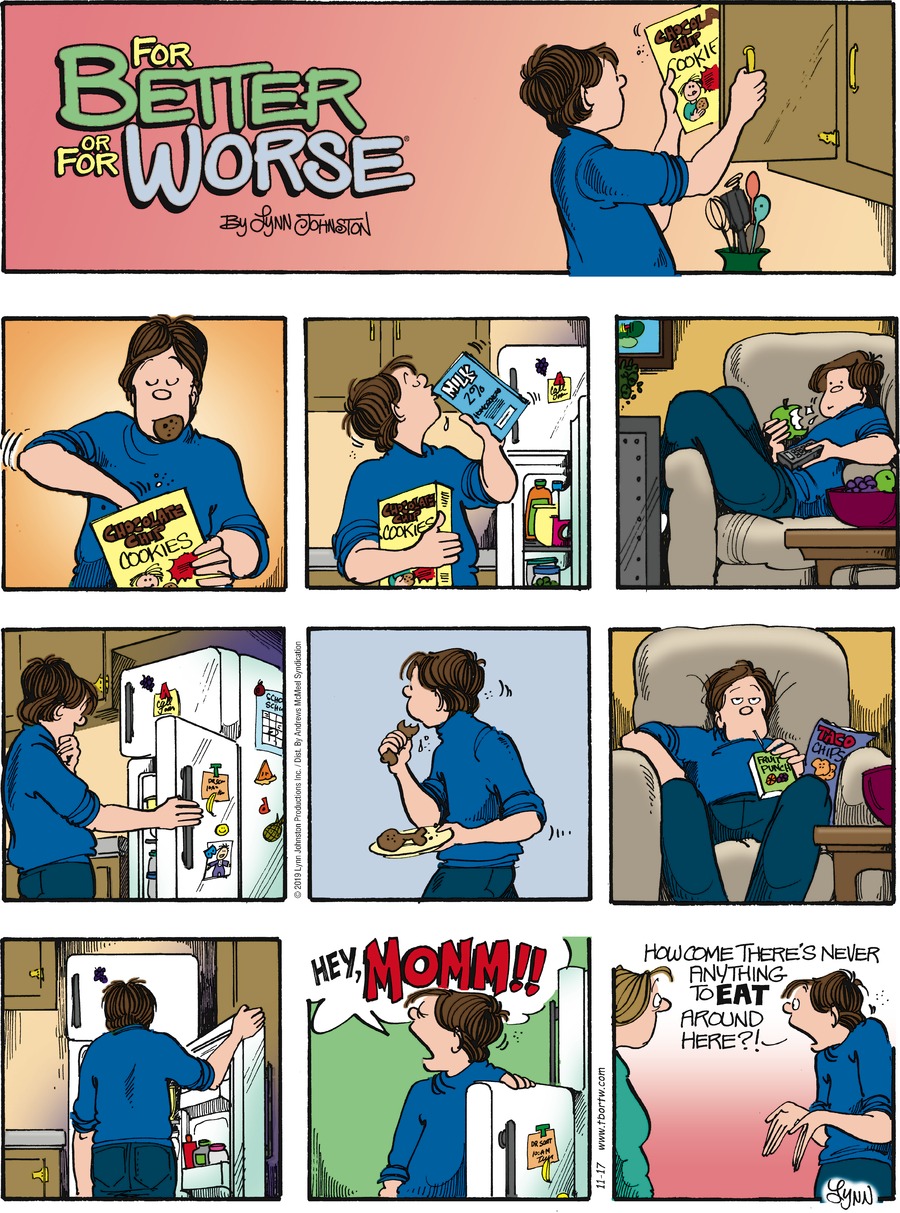 Lynn's Comments: I was hoping the item on the wire looked like a jock strap! When newspapers reduced the size of the comics page, we had much less space in which to make a gag work. Every square centimeter had to count and small details had to be drawn with real care so that they were evident to the reader. I hoped that I'd had enough space in the last panel to include the characters (for expression), the dialogue and the gag. Maybe not!

In Books: Things are Looking Up
Daily or Sunday: daily
Items: apple, carton of milk, jockstrap