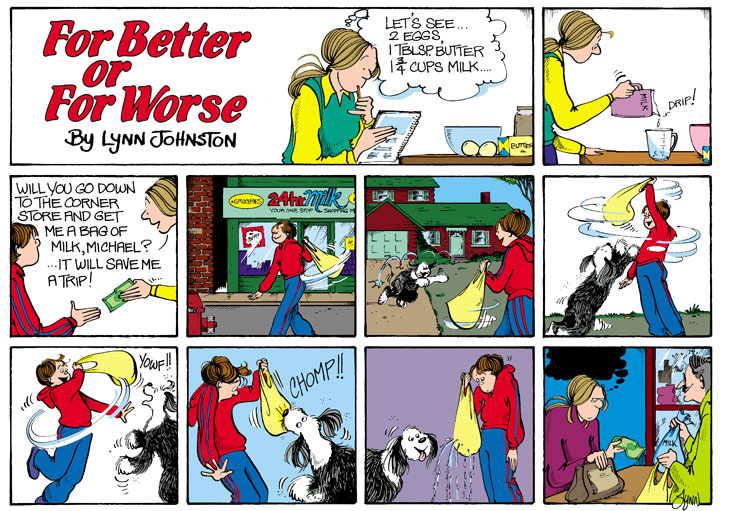 In Books: It's All Downhill From Here
Daily or Sunday: daily
Items: bag, garbage can, litter 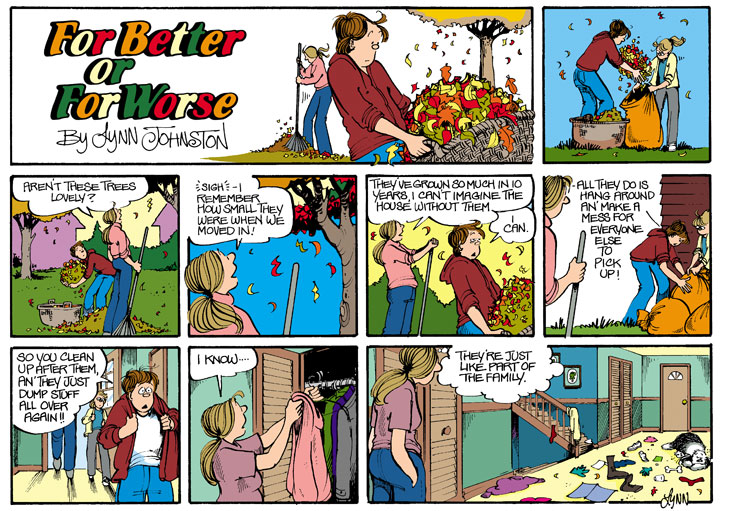 In Books: Growing Like a Weed
Daily or Sunday: daily
Items: bag, book

Lynn's Comments: Like so many, I would rather buy a can of pumpkin filling or purchase a whole darned ready-made pie, than go to the trouble of making one myself. In reality, I have only once cooked and eaten a pumpkin. In this one true-to-life case, I did cook our Halloween pumpkin and learned a valuable lesson: Never cook a pumpkin you've used as a Jack-o-lantern...it tastes like *#$%!!!

Lynn's Comments: Aaron was recently reminiscing about the great lunches I used to make for him; "Other kids might have a slice of cheese and some dry, white bread--but we got a great big, honking SANDWICH!" Katie didn't share his enthusiasm; "I used to trade mine with a boy who always had sugar sandwiches." (She's always had a sweet tooth.) I wasn't angry that Katie had given her lunches away--considering the poor diets of some kids, he probably needed a good, nutritious lunch more than she did.

Lynn's Comments: My husband, a dentist, did have a very sweet tooth. 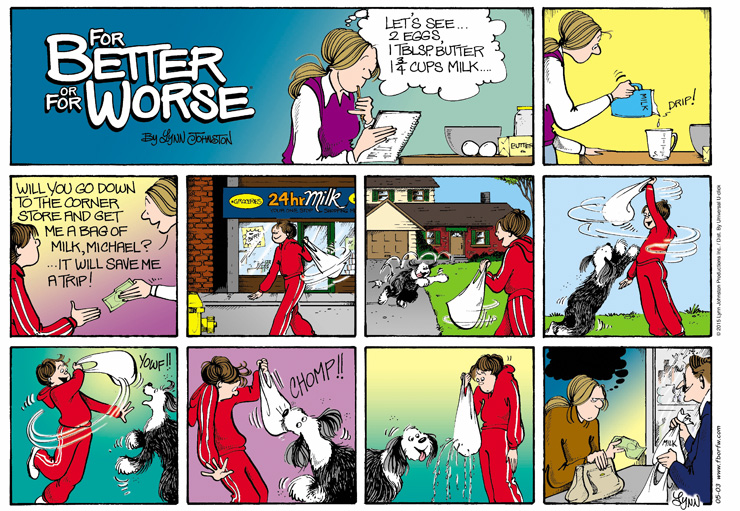 Lynn's Comments: After this strip ran, I received dozens of letters from readers who wanted to know what the heck was Michael doing with a bag of milk! Everyone knows that milk comes in waxed paper cartons or in plastic jugs, so what was this all about anyway?!

All an artist has to draw from is what she sees around her, and in my place of residence, milk comes in cartons, but also in strong plastic bags with a set of three bags of milk inside. Each smaller bag contains a litre of milk and we use special plastic or pottery jugs to keep them upright in the fridge. This way of packaging milk is as familiar in Canada as Coke in a can, so I assumed my readers everywhere would get the gag! Not so. The thing that struck me about the questioning letters was that some of them were as cruel and derisive as the trolls on the internet are today. They spoke with indignant authority, demanding to know what the **** I was talking about! Didn't I KNOW that milk doesn't come in bags?

Fortunately, this was when mean messages came with return addresses and we had a lot of fun sending photos and copies of milk advertisements to those who needed to see it for themselves. The impression I got from this was that not enough people travel, and they should!--Especially to Canada.

Lynn's Comments: I once offered local kids some money to clean up the road between my house and my mom-in-law's. It was a country road, so there was no way to cheat! The funny thing was that once they got going, they went from resenting the uncool side of cleaning a rural road, to being fanatical about it. They went down the road, far beyond our property--just because there was so much to pick up. I was so impressed!--And they say kids these days don't know how to do a job well!

In Books: It's All Downhill From Here
Daily or Sunday: daily
Items: bag, garbage can, litter 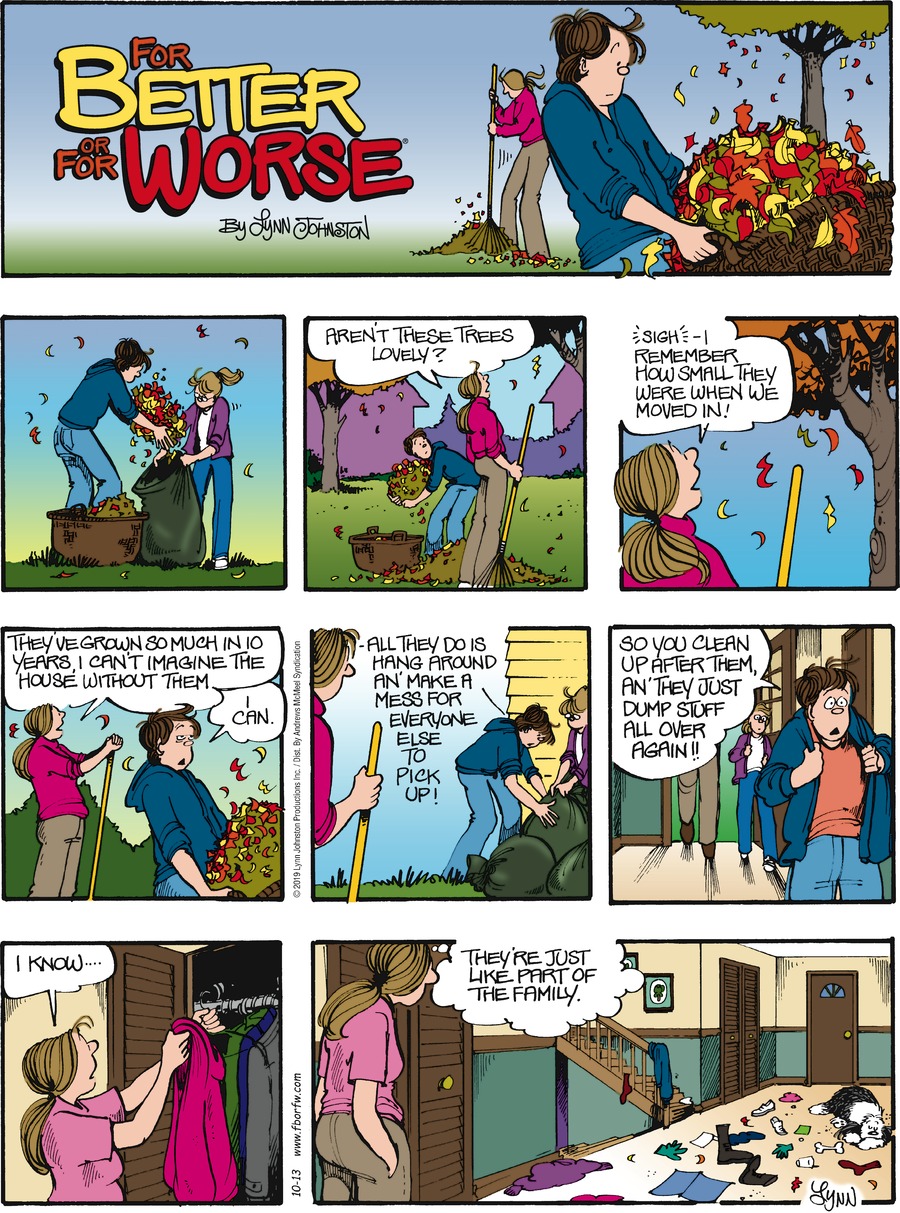 Lynn's Comments: We had a small piece of property near our house in North Bay. Friends who were involved with a tree planting program gave us two dozen evergreen seedlings to plant—which we did, hoping to see at least some of them survive. All of the seedlings grew, and today, there is a forest on that land. Hard to believe I have lived long enough to see a forest grow!