In Books: What, Me Pregnant?
Daily or Sunday: daily
Items: bookcase

In Books: Love Just Screws Everything Up
Daily or Sunday: daily
Items: bookcase 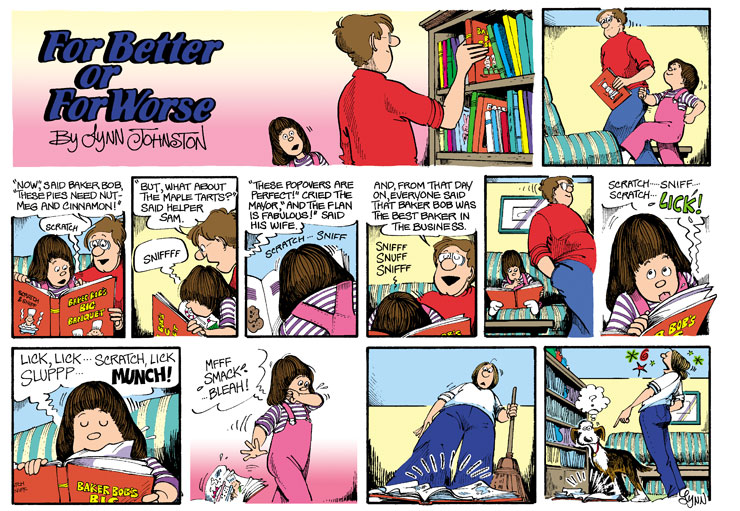 In Books: All About April, Love Just Screws Everything Up
Daily or Sunday: sunday
Items: book, bookcase 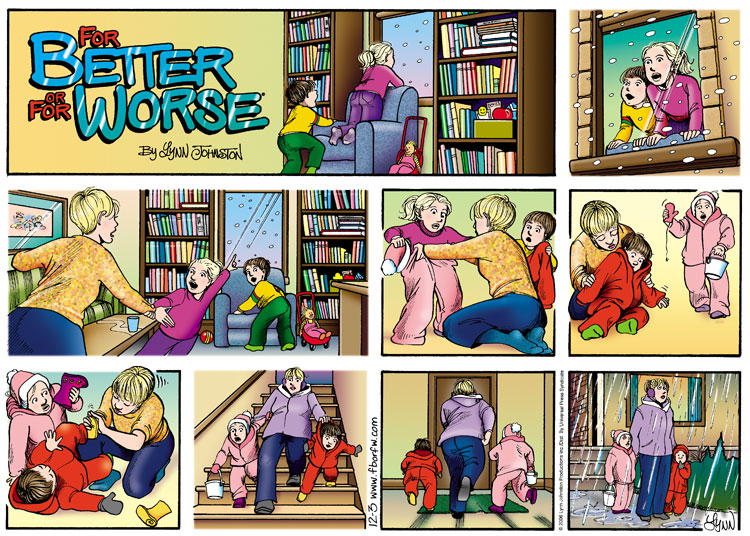 Lynn's Comments: In order to inject a bit of jealousy between my two main characters, I showed John firing off a definite ogle in the direction of Elly's shapely co-worker, Sue. I planned to take this farther and have something of a relationship evolve between John and Sue resulting in a serious exchange amongst all three. As in other attempts to show some "straying from the fold," I lost my nerve and never continued with the storyline.

Lynn's Comments: The punch line here came from my experience with McMaster University. When I was first hired as a medical artist, everyone was working in temporary facilities as we waited for the new medical centre to be finished. We all had direct contact with the doctors, for whom we were working, and information was easily transferred from the physician to us to the drawing board. Later, when we moved into the new building and the department expanded, supervisors were hired to supervise supervisors, and direct access to the doctors became impossible. Suddenly the artists were trying to get information through a chain of command, which naturally resulted in misunderstandings and mistakes. Going directly to a surgeon to find out exactly how to interpret a procedure was discouraged. What was once a straightforward process became... well,... like trying to take seeds out of a watermelon with rubber gloves on! In frustration, I became the class clown again; a jokester--it was the only way I could survive the assistants who were assistants to assistants!

Lynn's Comments: Aaron was at least eight before we would leave him at home on his own. We never left him for long--just an hour, perhaps. He always knew where we were, and it was a way to show him that he had our trust. We were able to do this because we had grandparents nearby and neighbours who knew everything that Aaron was up to...and would tell!

Lynn's Comments: I had fun drawing this character. I had meant her to be very sexy and very nice--someone who would possibly come between Elly and John. She would make Elly jealous, in any case. As the library job continued, Susan became less and less visible. I couldn't quite resolve her relationship to the rest of the characters...and, perhaps, I was afraid that life might imitate art!

In Books: What, Me Pregnant?
Daily or Sunday: daily
Items: bookcase