Lynn's Comments: While the character, Uncle Phil, was starting to get serious about the character, Georgia, my brother had met Joan in real life. Since the quitting smoking story and the move in the strip closely and coincidentally paralleled his own life, Alan had me promise not to have Phil and Georgia announce their wedding plans until he had proposed to Joan!

Lynn's Comments: Our log house had an opening next to the top stair, just before you stepped up to the second floor. It was a perfect spy-hole from which the kids could watch what was going on downstairs in the living room. We knew it was there, but we'd forget. Many an evening's get-together was monitored by two silent, pyjama-clad spies, who went undiscovered ... unless they snickered or fell asleep at their post! 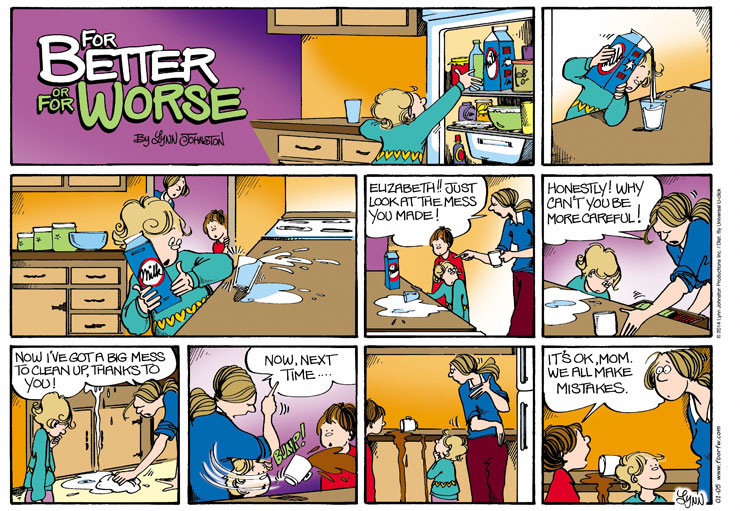 Lynn's Comments: I made good use of my own childhood experiences, and one of the things that plagued families of the 1950s was the need for parents to be right. It was, "Do as I say, not as I do," which never made a heck of a lot of sense to me. If Dad swore, swearing was cool. If Mom smoked, smoking was cool too. If what they told us didn't add up, we were quick to object, but the folks were always right--no matter how wrong they were. This was a hard facade to maintain. When I had kids of my own, I discovered that it was much easier to admit to a mistake than try and justify it. 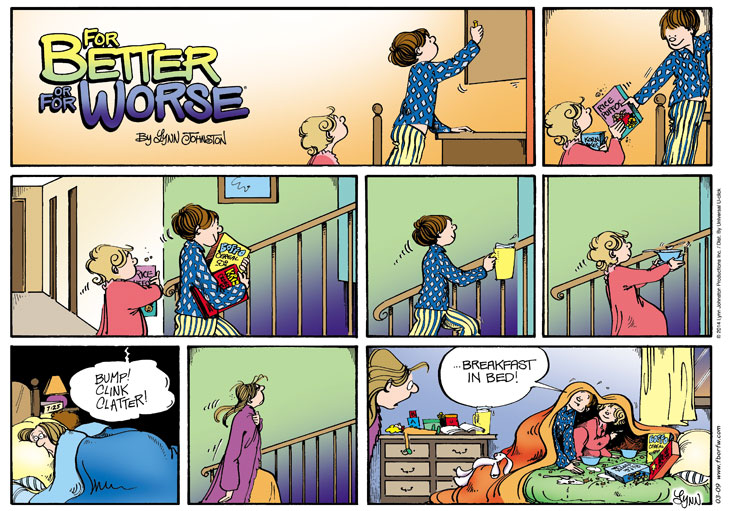 Lynn's Comments: The breakfast in bed scenario is always shown in cartoons as a parent in bed and the kids delivering a messy meal. I wanted to turn it around and have the kids messing up their own space. I thought this was more often the case.

Lynn's Comments: My mother didn't like me drinking out of the water faucet in the bathroom sink. She told me that there were snakes in the water pipes and they laid eggs in the water, so I had to look at the water in the glass to make sure there were no eggs in it. If I drank directly out of the faucet and swallowed the eggs, well--snakes would grow in my stomach and come wriggling out of my nose! It worked. I stopped drinking out of the faucet and looked for eggs in every glass of water I poured. I still think of this when I get a glass of water. The "power of suggestion" is power, indeed! 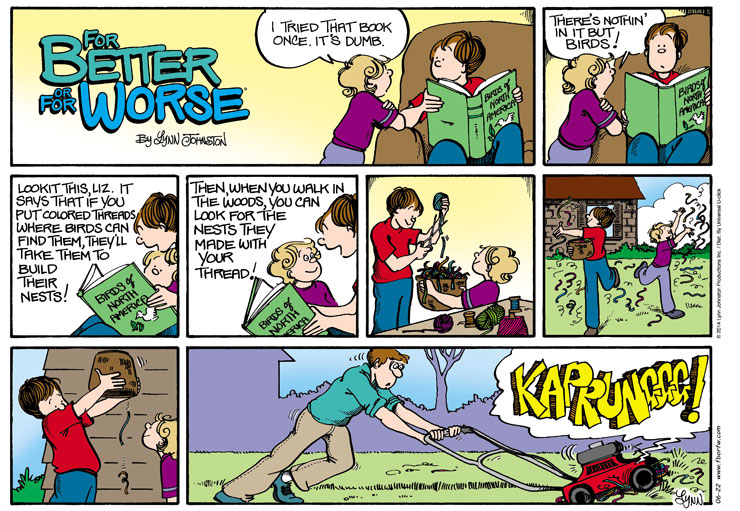 Lynn's Comments: I think I've told you that Ruth, my mother-in-law, was a weaver. She must have had three looms going at once and extras for friends who wanted to learn. Thrifty and thoughtful, she kept every scrap of fabric and every piece of yarn. The cut ends from her warps and weavings, called thrums (there's a name for everything!), were kept for stuffing and felting and for birds' nests--which I thought was neat. In early spring, Ruth would go for long walks in the woods and leave handfuls of thrums along the way for the birds to find.

An avid birder, she would then retrace her steps and watch for nests, which had been made with her threads. Determined to see me do the same, she gave me a basket of thrums to distribute. We were well into nesting season, and when I still hadn't thrown the thrums, she began to grumble. Annoyed and lazy, I tossed the threads onto our lawn and forgot about them until the lawn needed mowing. I started the mower and was happily going along when suddenly the thing seized with a loud, metallic THWANGGGGG. Smoke came out from under the cowling with a burning rubber smell. I unplugged the mower and turned it over. Strangling the blade was a broad band of colourful, smouldering thrums.

Lynn's Comments: Although I never saw my children trying to eat from a bowl like a dog, it was something I tried to do myself. The weird thing about this confession is that I was in my twenties when I did it!

Lynn's Comments: I still believe this theory to be true. My mom-in-law's secret for serving the best hostess meals ever was: offer lots to drink and no nibbles. Then, when your guests are ready to eat the coasters, whatever you serve will be the best they ever tasted.

Lynn's Comments: Our dog, Willy had a permanent roost under Katie's chair. As soon as she was seated, he'd race into position and wait. It didn't take long for her to become an accomplice in the game of "don't feed the dog." This charade went on relentlessly, and the only player who lost was me.

In Books: It's All Downhill From Here, Remembering Farley
Daily or Sunday: daily
Items: bowl, plate of food, salad

Lynn's Comments: There were several Mrs. Bairds who thought this lady was named for her. One was a friend of my father's. Another was a neighbour we had in North Vancouver. When I needed a name, this one popped up, and I have no idea where it came from!

In Books: It's All Downhill From Here, The Comic Art of Lynn Johnston
Daily or Sunday: daily
Items: bowl, potatoes

Lynn's Comments: I think there's a play out there somewhere called, "I Love You, You're Perfect. Now Change." Does anyone know anything about this? Is it still running somewhere? I thought it was the best title, but never got to see the play!

In Books: It's All Downhill From Here
Daily or Sunday: daily
Items: bowl, casserole, pot, salad

Lynn's Comments: This scenario dates back to my own childhood. My brother and I would torment each other by simply staring. This "game" even had a name: it was "Seeing" (from the lament, "Daddy! She's seeing at me!") This could get intensely annoying, and when my brother finally broke down and asked Dad to intervene, he got into the act. He invented the "one eye see," the "two eye half see," the "blinking see," and so on. With Dad ready to play the game along with us, the sport quickly lost its competitive sting and we gave it up. That is until I told my kids about it--and the tradition carried on. 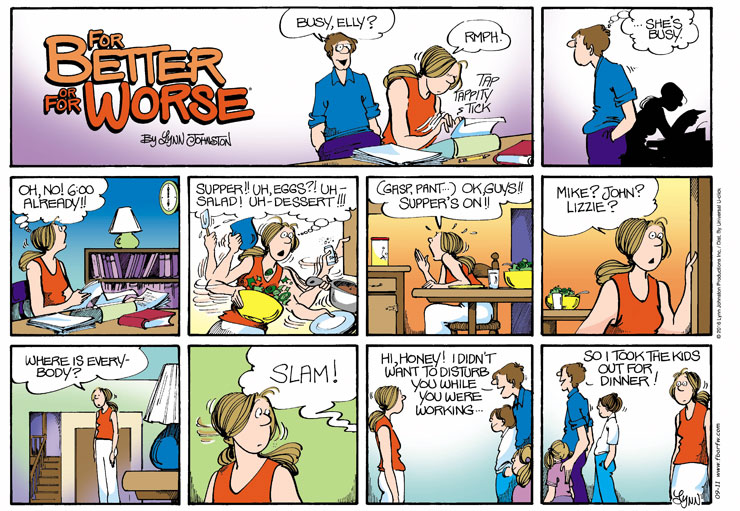 Lynn's Comments: This is another true situation. There were times when I was so engrossed in writing or drawing the strip that I was oblivious to everything else around me. My kids could talk to me, ask for things, say stuff that didn't make sense, and I'd simply nod and smile. An entire day could go by and I'd forget to eat or even get up and walk around. It was like being in a sound sleep. There were times when people would have to distract me from my work, look me in the eye, make sure I was absolutely focused on them, and then say what they wanted me to hear!

Lynn's Comments: I was glad that the fireworks tradition wasn't part of an Ontario or Manitoba Halloween. On more than one occasion, we were threatened by big kids who wanted to ignite our paper costumes with "lady fingers" (small, red, tube-shaped fireworks) or sparklers. Every year, someone got hurt. 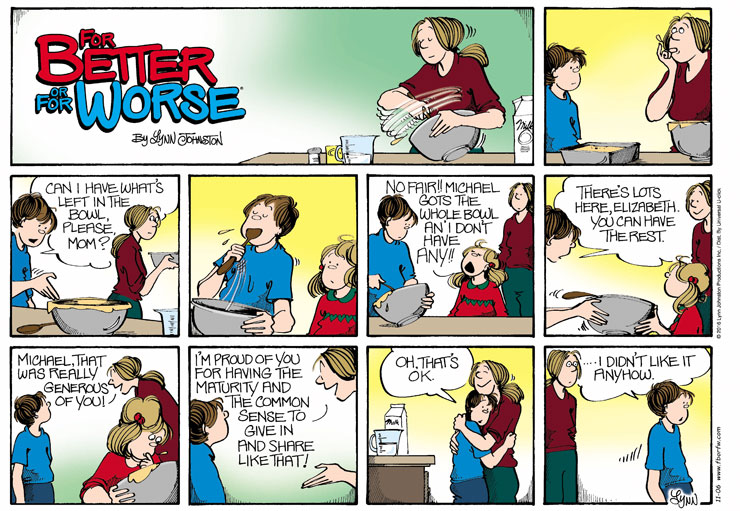 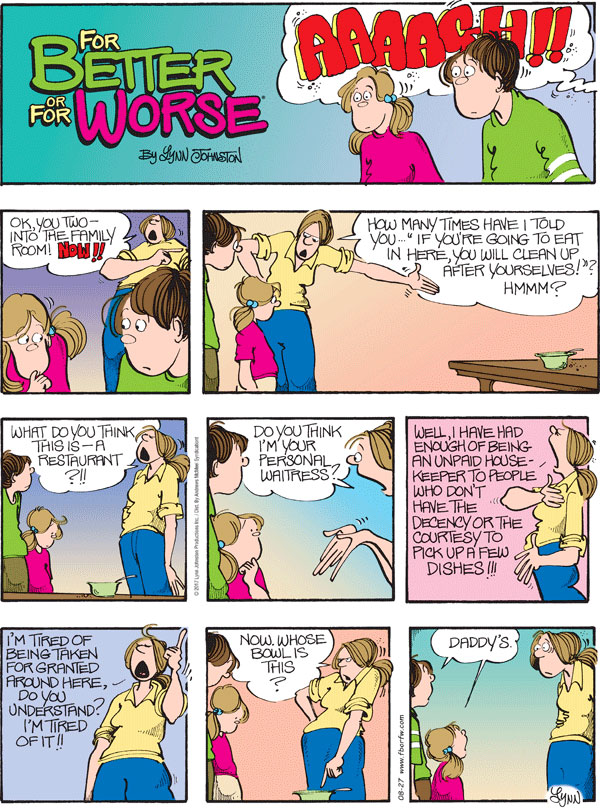 Lynn's Comments: Occasionally, I would use the strip for a personal rant. I got my point across to my family in a way that was, perhaps, more palatable than the real thing. Not to say that I didn't rant about this for real. I did. The best part of putting real feelings out there…was the response I got from readers who said how true it was. Some said they had given this strip to the guilty parties to show their frustration. I had put their and my feelings in print. Somehow, seeing a situation on the comics page legitimized it. 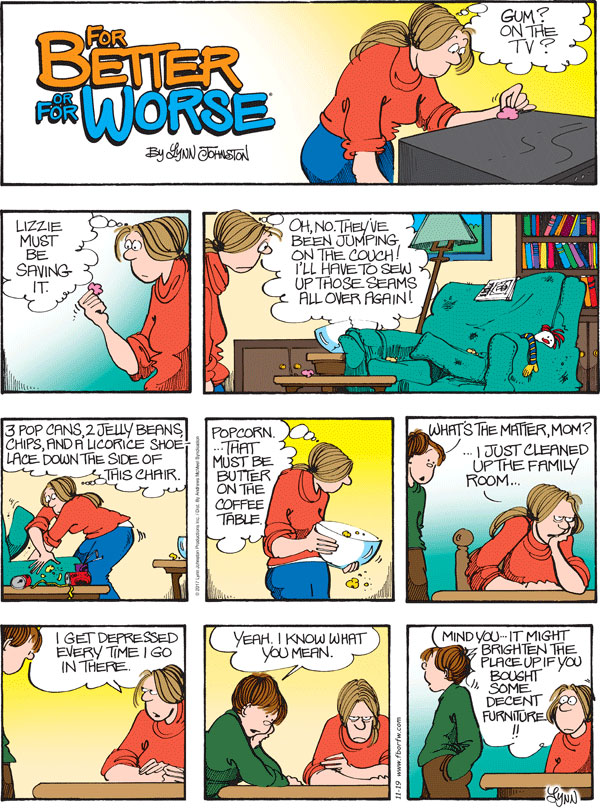 Lynn's Comments: I can't write anything about this strip. I would get crabby about it all over again!

Lynn's Comments: This didn't happen, but if Kate had thought of it, it would have. And, as a kid, I would have too.

In Books: If This is a Lecture, How Long Will it Be?
Daily or Sunday: daily
Items: badminton racket, bowl

In Books: If This is a Lecture, How Long Will it Be?
Daily or Sunday: daily
Items: bowl, box, dishes, kettle, lamp, mess, skis