In Books: I've Got The One-More-Washload Blues, Something Old, Something New
Daily or Sunday: daily
Items: costume, magazine

In Books: I've Got The One-More-Washload Blues, Something Old, Something New, Suddenly Silver
Daily or Sunday: daily
Items: costume

In Books: In The Beginning, There Was Chaos, Is This One of Those Days Daddy
Daily or Sunday: daily
Holiday: Halloween
Items: costume, Halloween costume

In Books: In The Beginning, There Was Chaos, Is This One of Those Days Daddy
Daily or Sunday: daily
Holiday: Halloween
Items: costume, Halloween costume, treat bag 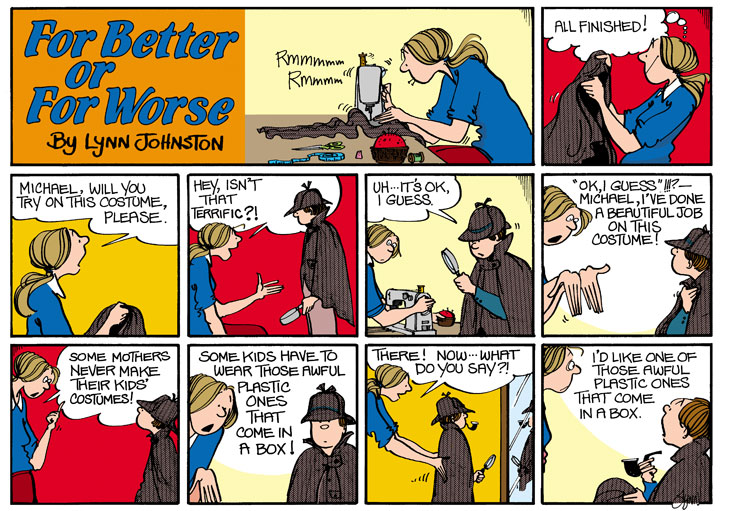 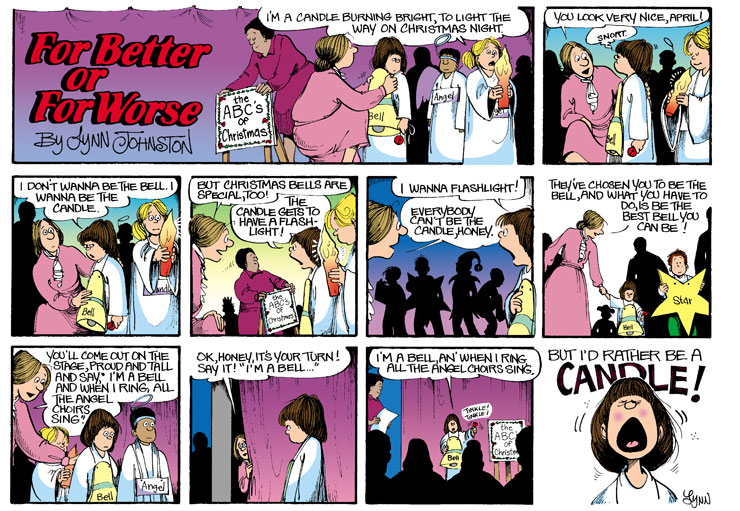 In Books: I've Got The One-More-Washload Blues, Something Old, Something New
Daily or Sunday: daily
Items: costume, magazine

Lynn's Comments: I dressed Katie up in a "Little Bo Peep" outfit for Hallowe'en one year and she looked so cute, I couldn't stand it! Trouble is, we lived a northern community where the temperatures dipped well below zero at this time of year and every costume had to fit over a parka. I took her door to door, opening up her jacket to show off her costume to friends. Kate objected to this strenuously. I eventually resorted to explaining who she was and what she was wearing so she could go directly to the loot without preamble. She lasted for 4 blocks ...a good space for a toddler, not far enough for me. I was just getting into the swing of things. I still have her costume and some day, if I'm lucky, I'll see it worn again.

In Books: In The Beginning, There Was Chaos, Is This One of Those Days Daddy
Daily or Sunday: daily
Holiday: Halloween
Items: costume, Halloween costume

Lynn's Comments: My son, Aaron had a great cowboy costume- right down to the vest, chaps and 6-guns. He would get into this even if it wasn't Hallowe'en, bounce around the house as if he was on a horse and shoot everything in sight. We bought the hat, gun, Sheriff's star and plaid shirt in Winnipeg. I made the chaps, vest and neck scarf. He was just another kid until the outfit was on and then he turned into the wildest of the wild. This was his costume of choice until he grew out of it. This, too, I have preserved in an old trunk, waiting for someone else to make it come to life!

In Books: In The Beginning, There Was Chaos, Is This One of Those Days Daddy
Daily or Sunday: daily
Holiday: Halloween
Items: costume, Halloween costume, treat bag

Lynn's Comments: I don't remember my own Christmas pageants, but my kids remember theirs. Anything that required a script and stage was taken seriously in Lynn Lake, where entertainment was all home made. Costume sessions and rehearsals took place in private homes and the community centre would be packed as friends and family vied for the best seats in the house. Aaron played the part of a shepherd one year, dressed in his bathrobe and striped pajamas, and a reindeer the next. Being in front of an audience never fazed him and even without lines, he played his roles to the hilt. The elementary school teachers were full of ideas and had the courage to pull them off. Music was provided by Mr. Bergan's music group and the community choir. It's amazing to me now, to think about how the town would come together as one for these things, and the talent within our own crowd was amazing.

Lynn's Comments: Again, the material that appeared in the strip was mostly made up. It was fun to imagine what it would be like to have a large, busy class of kids, all involved in putting on a play and one harried teacher in charge of everything. I could play the role of the teacher and also the kids and I tried to put myself into every possible scenario. Aaron's teachers were, again, part of our circle of friends. If I needed the inside scoop on anything, all I had to do was ask! If I wanted to know anything about pharmacy, I'd ask Bob at the drugstore. If I wanted to know anything about the workings of the corner store, "Fergy" Ferguson would be glad to oblige. I talked to the RCMP and to the pilots and to anyone whose career might possibly appear in the strip. Living in a small town meant ready access to wonderful resources, long before the internet made research so easy.

Lynn's Comments: The night I went trick-or-drinking, I wore a white-blonde wig, a Dolly Parton-style outfit, and my false teeth. In a British accent I'd learned from my mother, I greeted our wary hosts who repeatedly begged me to tell them who I was. I was one of the few revellers that night who got to do the big reveal the following day.

Lynn's Comments: When we moved to North Bay and there were many neighbourhoods to canvass on Halloween, we knew that one of us would be carrying Katie home. One night, I saw a friend pulling a wagon behind her as she accompanied her costumed children and I said, "Whoa! Is that to carry all the loot they're gonna get?" and she said, "Nope...it's to carry THEM!"

Lynn's Comments: I have a wonderful costume trunk. Over the years, I have amassed a huge variety of dress-up clothes, masks, wigs, props and makeup. We never lacked for materials when Halloween, plays, and local ice shows came along. I was never too protective of the supplies, which have been lent to family and friends, and now, passed from generation to generation. 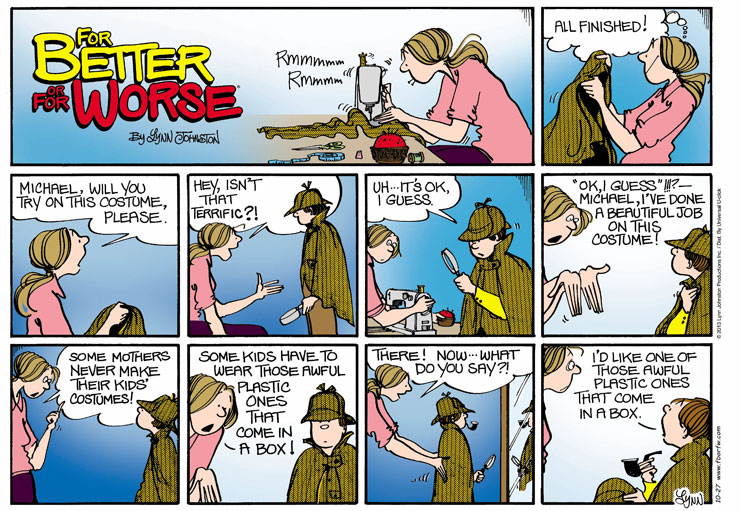 Lynn's Comments: Like me, Aaron and Katie truly appreciate good costumes. Every year at Halloween, they just had to look in the costume box or make a suggestion, and we had a plan. We would all get into the spirit of making wearable art. There was nothing too complicated or too farfetched for us to make and, our kids had the best homemade outfits ever (if I do say so myself). We had a Sherlock Holmes hat, pipe, and cape, but the year this strip was done, Aaron didn't want to dress as Sherlock. I was insistent and said that all I had to do was make the jacket, but no deal. Instead, he painted himself green and went out as the Hulk. Left to mourn for Holmes, I did this series of strips in his honour.