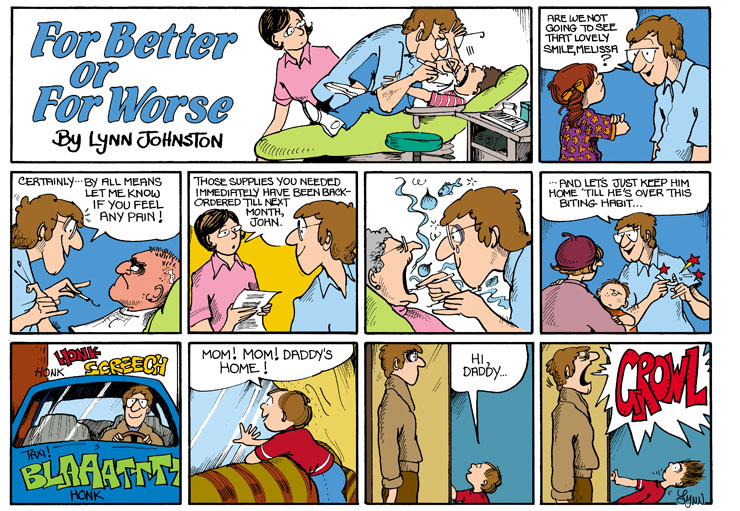 In Books: A Look Inside...For Better or For Worse, I've Got The One-More-Washload Blues, Something Old, Something New
Daily or Sunday: sunday
Items: dental chair, fish, garlic

In Books: If This is a Lecture, How Long Will it Be?
Daily or Sunday: daily
Items: dental chair, teddy 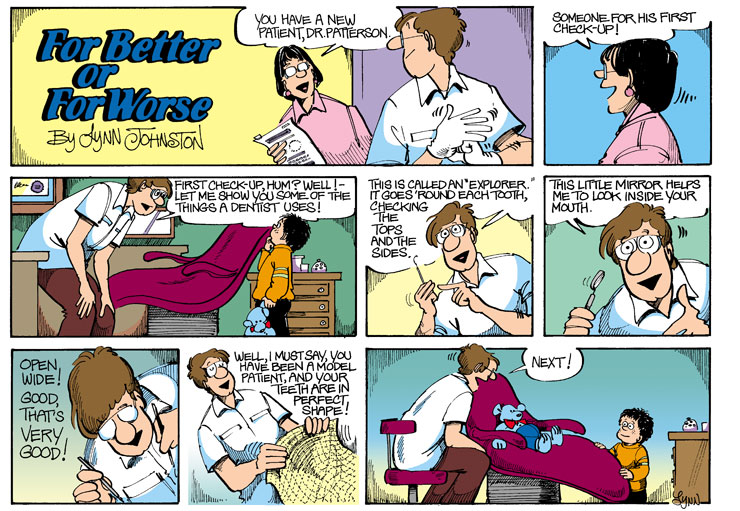 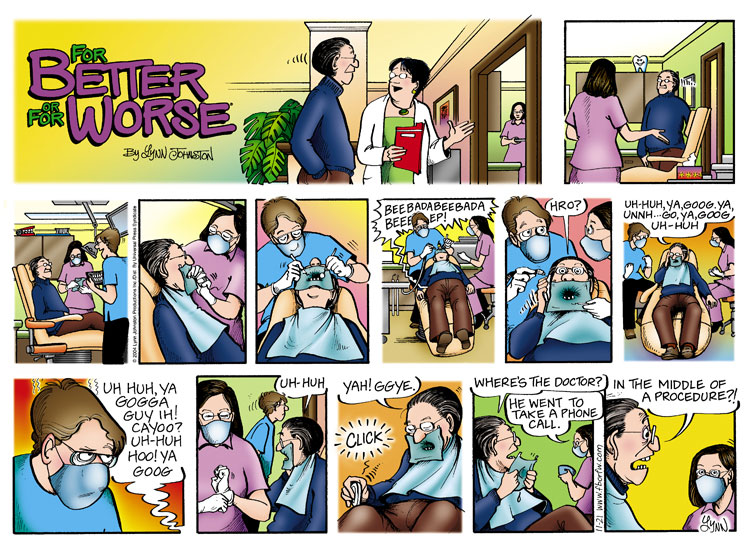 In Books: She's Turning Into One of Them!
Daily or Sunday: sunday
Items: dental chair 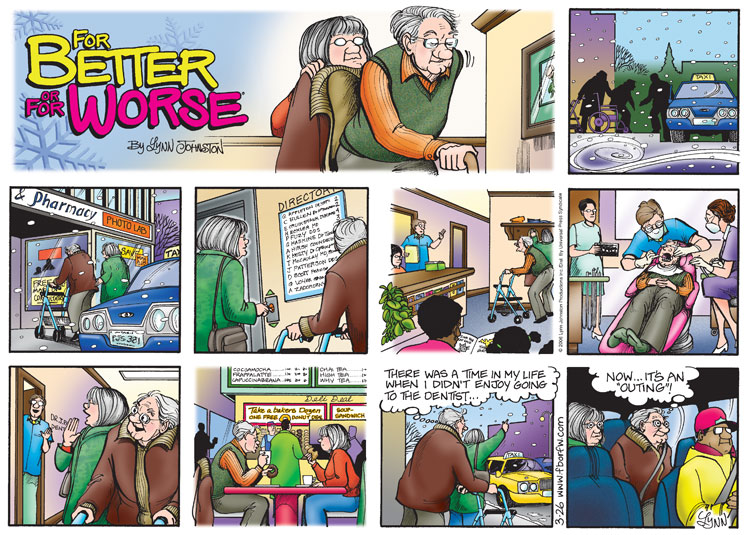 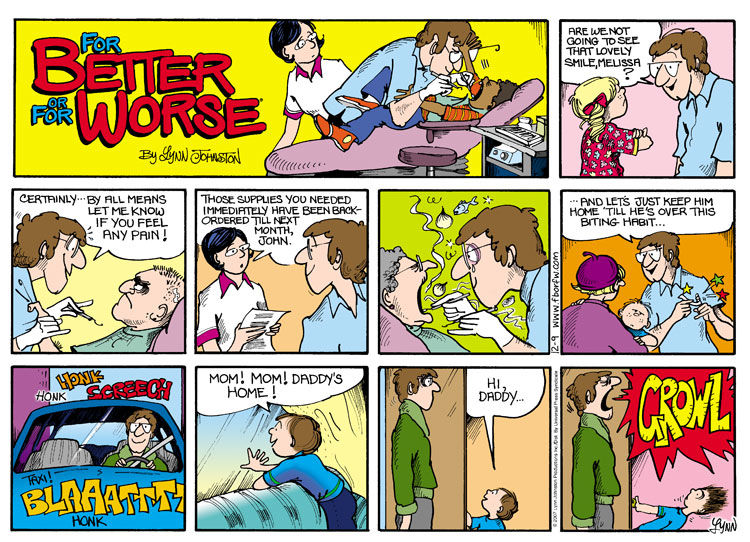 In Books: A Look Inside...For Better or For Worse, I've Got The One-More-Washload Blues, Something Old, Something New
Daily or Sunday: sunday
Items: dental chair, fish, garlic 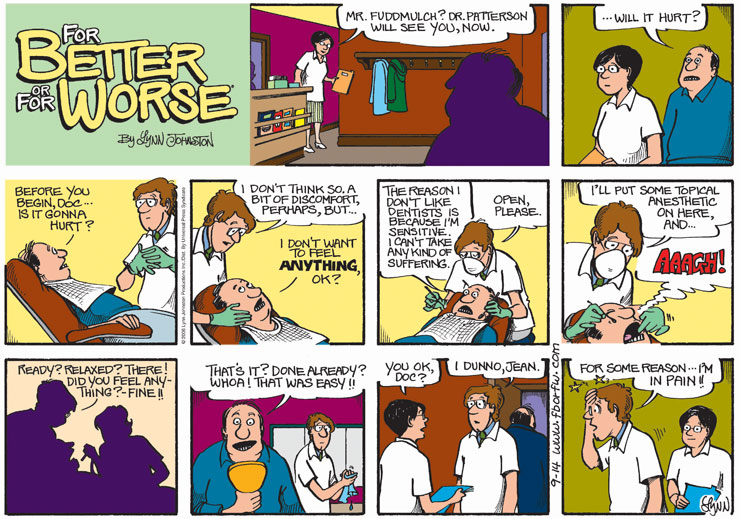 Lynn's Comments: Having to do dentistry single-handed is really difficult, but it happens on occasion. Four-handed dentistry is now such a way of life that only the folks who practiced before this was taught, or have worked in third world countries, can manage comfortably.

Lynn's Comments: Every now and then I could work in a "public service announcement" thanks to our in-house dentist. Grinding your teeth at night is something many of us do without being aware of it. You can even crack a filling with the strength of your jaw. A "bite splint" will help to relax your jaws at night and keep you from having that awful head-achy feeling in the morning. Sadly, it can't help to solve the problems that make you grind your teeth in the first place!

Lynn's Comments: I actually looked forward to working in the clinic. It wasn't the passing of instruments that appealed to me as much as it was dealing with the patients. I really enjoyed putting them at ease and explaining the procedures. This later influenced my decision to learn Spanish and travel with the Medical Missions to Peru. Explaining an otherwise worrisome situation to anxious patients and seeing them relax with a smile, made my task a joy. It was one of the most rewarding things I have ever done.

Lynn's Comments: Fortunately for Alan, he was never a patient. My mother, however, allowed me to practice on her. I remember her under the gas, which was a lot of fun. I had never seen her so relaxed and funny.

Lynn's Comments: These chairs can't really dump you out like this. Once in awhile, I did exaggerate--for the sake of a good laugh!

Lynn's Comments: I had no idea how important it is for a horn player to maintain his/her teeth and mouth so as not to disturb the embouchure they have worked so hard to perfect. When my brother came to the clinic to have some work done on his front teeth, he was very nervous, hoping there would be no change.

Lynn's Comments: This very situation brought my assisting career to an end. Dentistry is a fiddly business with many frustrating procedures. When my husband sharply asked for an instrument or for suction, I expected a polite "thanks" for my efforts, but he just carried on. His brusque manner wasn't personal--I just took it the wrong way!

Lynn's Comments: When we moved to North Bay and set up a new clinic, we had two refrigerators--the one with the sandwiches was in the dining area.

Lynn's Comments: At the time when I was working in our dental clinic, recorded music for headphones and office ambience was hard to come by. A small cassette player was all we could offer our patients, and eventually they had heard all of the albums we owned. We were living in an area where radio reception was intermittent at best, and satellite stations hadn't been invented yet. What we had was an enormous reel-to-reel system and about 10 huge reels of tunes we had prepared ourselves. We thought this would be enough music to last forever considering the number of albums we had recorded (illegally, I now realize), but after a few months, as the reels played, were changed, and played again, we could all hum the next tune before it even started!

In Books: If This is a Lecture, How Long Will it Be?
Daily or Sunday: daily
Items: dental chair, teddy