In Books: I've Got The One-More-Washload Blues, Something Old, Something New
Daily or Sunday: daily
Items: cosmetics, makeup

In Books: In The Beginning, There Was Chaos, Is This One of Those Days Daddy
Daily or Sunday: daily
Items: makeup 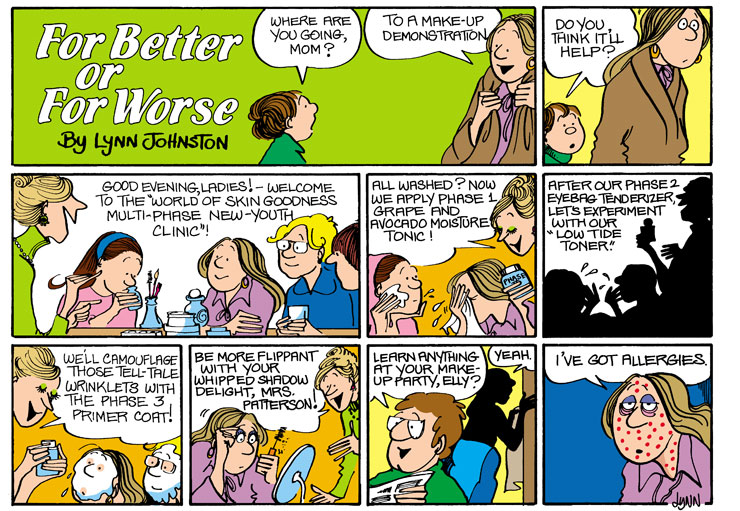 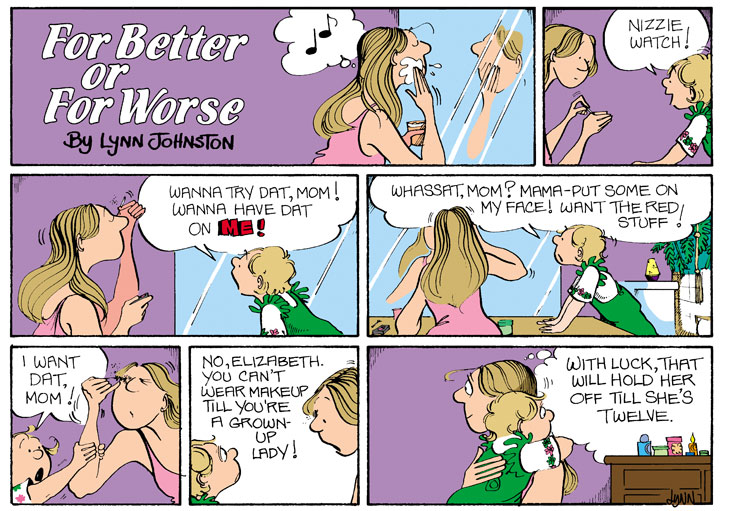 In Books: In The Beginning, There Was Chaos, Our Sunday Best
Daily or Sunday: sunday
Items: makeup

In Books: There Goes My Baby!
Daily or Sunday: daily
Items: makeup 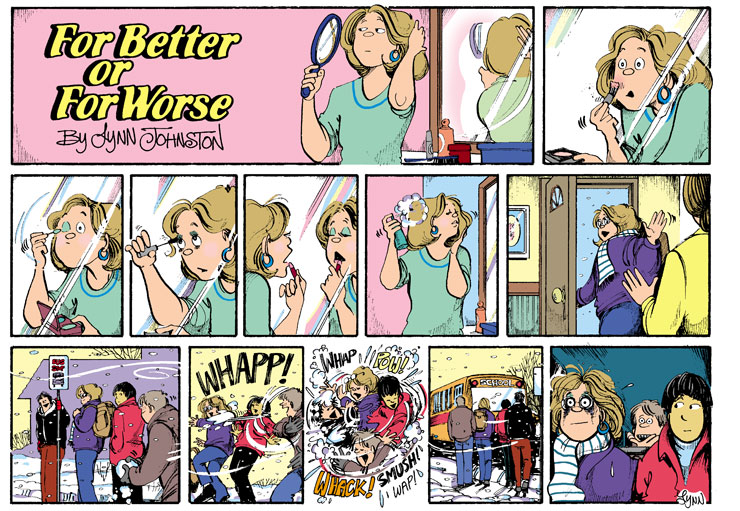 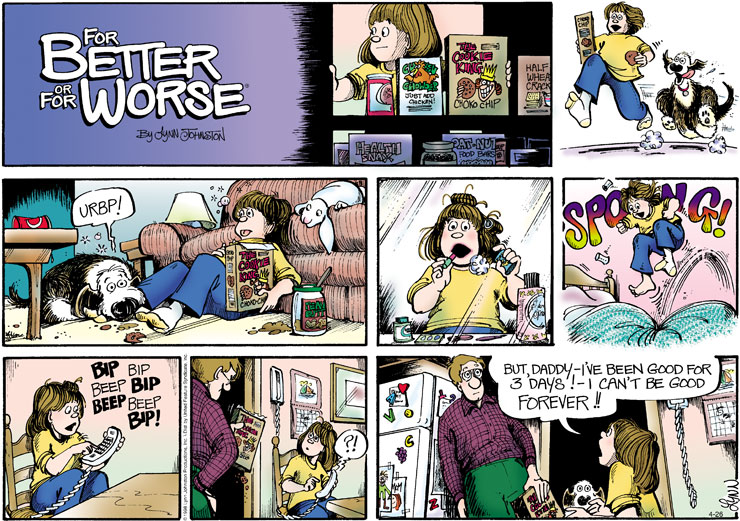 In Books: In The Beginning, There Was Chaos, Is This One of Those Days Daddy
Daily or Sunday: daily
Items: makeup 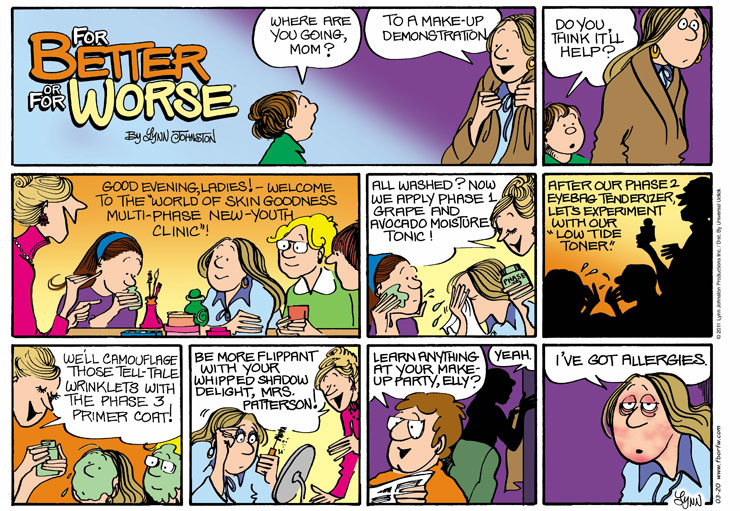 Lynn's Comments: This Sunday page was also done as a result of a television program. The National Film Board had started a sort of documentary on FBorFW and a crew had been sent to Lynn Lake to record the local "colour". One of the things we ladies did for fun was to attend different demonstrations in each others' homes. Small private sales events were as popular then as they are now. We went to Tupperware and candle sales, clothing shows, cooking and make up demonstrations - anything that would get us out of the house and into an adult environment. Booze was optional, but certainly helped augment the ambiance and the sales. For the sake of the Film Board, I agreed to host a makeup demonstration in my home. The process required the participants to allow their hair to be tied back so that a variety of goops and granules could be spread on our faces. This was not appreciated by some of the ladies who had never been on television and didn't want their debut to be mid toilette. After a bit of cajoling and a few drinks, we proceeded to give the NFB the inside scoop on the home facial demo...doing what we could to make this the highlight of the film. It took hours and many applications of facial stuff before we could call it quits. The ladies departed with grateful thanks from all involved and I promised them a copy of the video if it ever came to be. It did. The all-day makeup demonstration, with retakes, reasks, and redos, however, was reduced to less than two minutes of the film. In the end, no one complained. It was fun to do, but none of us really wanted to see the results. Some things are best left on the cutting room floor! 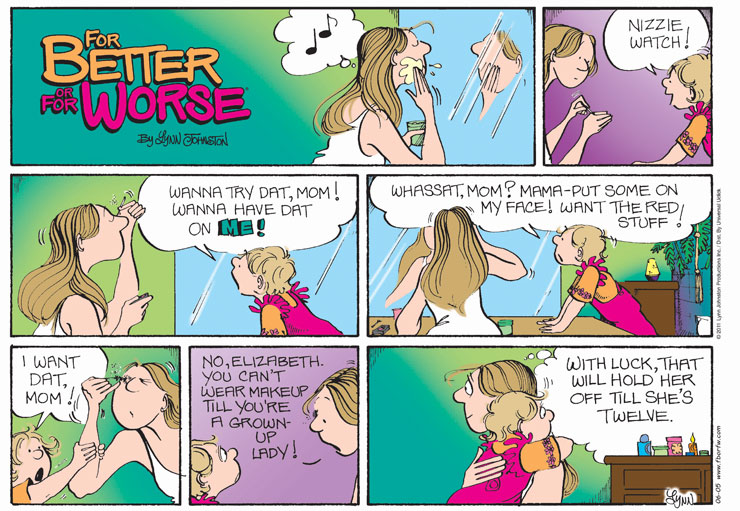 Lynn's Comments: Like most little girls, I was fascinated by make up and wanted to try it on. My mom didn't use much and what she had was out of bounds. Had I ever gone into her cosmetics without permission, I would have been in serious doo doo. One of my mothers' friends was a sales rep for Avon. She carried a stunning assortment of tiny "trial-sized" lipsticks which she gave away when the line changed and the colours were discontinued. Mom was often the recipient of her generosity and when the tiny tubes were empty, I would retrieve them from the garbage and use a toothpick to get the last smudge of colour from the bottom. Sometimes I'd find a big tube tossed away, which was great - except that the colour was always far too red. In order to get away with wearing the stuff, I would heat the tube and mix the lipstick with Vaseline. I managed to sneak the slightly rouged lips past my mom... until I left the tube in my pocket. This, of course went into the wash - leaving a load of laundry covered in red blobs. Too angry to speak, Mom took the ruined clothing upstairs and with a philosophical "what have I got to lose" attitude, she boiled the lot with soap powder in her big canning pot. All of the lipstick came out of the clothing! I was saved. Then it was time for the inevitable lecture about being too young and sneaking around. The next day, she came home from work with a tube of pale pink lip gloss. I had my lipstick and I could wear it openly. Nice touch! Having the "real thing" however, sort of dampened the spirit of adventure and I lost interest in make up until I was in my early teens!

In Books: In The Beginning, There Was Chaos, Our Sunday Best
Daily or Sunday: sunday
Items: makeup

Lynn's Comments: When this strip was first published in 1984 the second panel read, "I can't--all my stuff is in THAT one!!" The other day I received a call from Sue, my long-suffering editor, who asked me if it was better grammatically to say, "All my stuff is in THIS one"--considering that John was referring to the bathroom directly in front of him and not the one downstairs. I agreed, and we changed the dialogue. I guess this proves that it's never too late to be caught by an editor!