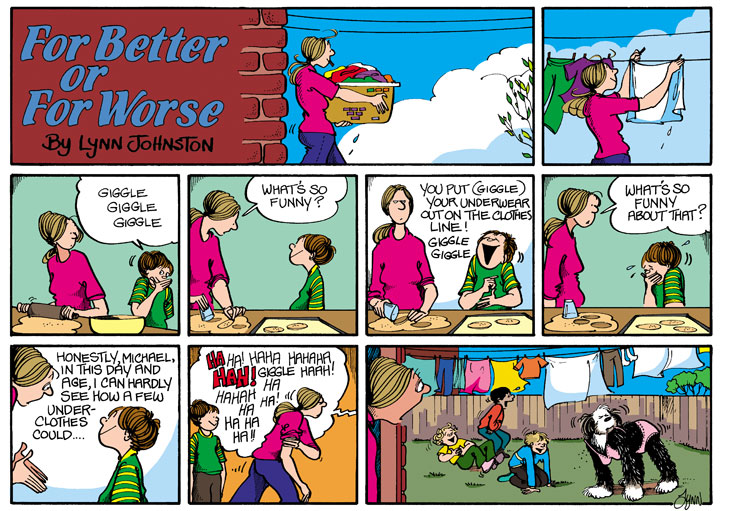 In Books: With This Ring
Daily or Sunday: daily
Items: bra, panties

In Books: She's Turning Into One of Them!
Daily or Sunday: daily
Items: bra, mirror, panties 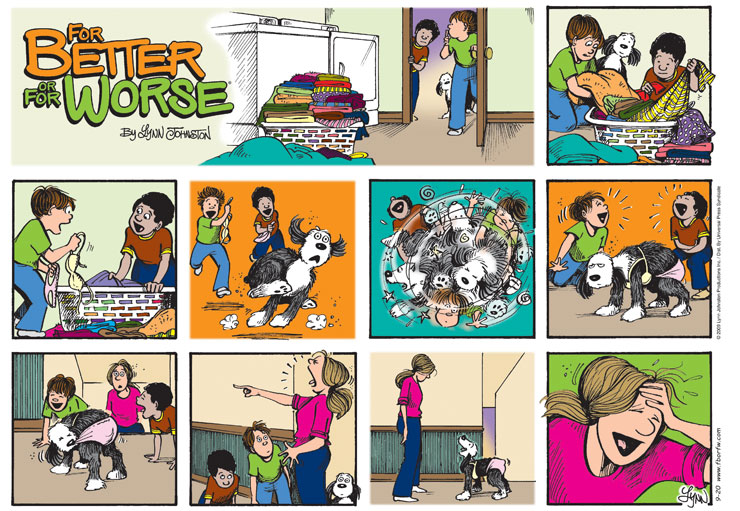 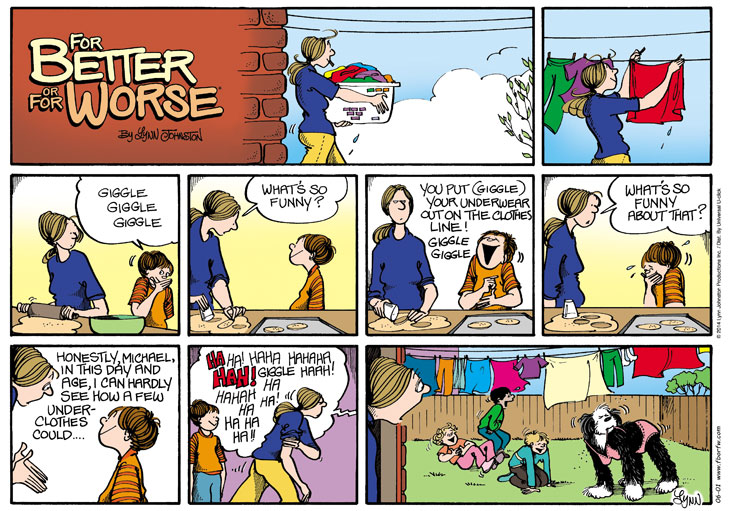 Lynn's Comments: My mother had a day of the week for laundry. Rain or shine, she washed on Wednesday, and there was an order to the way she hung the clothes on the line. Sheets, towels, and good clothing was hung first--so it could be seen and appreciated by the neighbours. Underwear and things not meant for public scrutiny were hung closer to the house. These things were easily reached by standing on the rungs of our porch railing, and often fell prey to my brother--whose pranks with Mom's unmentionables were legendary.

After our neighbour's big dog, Teddy, died, their daughter, Tootie (our babysitter), bought a small fuzzy pup, which she called "Noby"--short for "Nobody." Noby was a sweet, easygoing little pooch who put up with just about anything the local kids would do to her. One day, Alan decided to dress her up in Mom's underwear. Noby dutifully stood still while bra and panties were administered. Al expected a wild struggle for freedom, but Noby stood still. Frustrated by the lack of action, Al lifted Noby up and placed her inside a sheet, which had been doubled so it could hang on the lower line. Noby went crazy. She squirmed and howled, and we worried that she'd tear the sheet open. Tootie soon came to her rescue. She pulled Noby out of the sheet, cuffed my brother on the side of his head, threw the bra and panties on the lawn, and went home.

I picked up the underwear and put it back on the line. The sheet was left to dry. Later, when Mom pulled in the laundry, I watched as she folded it. When she got to the underwear, she frowned, wondered why it looked unwashed, but kept on folding. Then she reached for the sheet. There in the middle was a mess of dirt and dog hair. Mom looked at me and said, "Where's your brother?" Alan, of course, was gone. I was close at hand and received the brunt of her wrath. After a thorough tongue-lashing, I was sent to my room--Al had to wait. Nothing was said when he came home, and I was furious. I thought I had taken the blame for everything! Later that evening it was clear that justice prevailed. When Al pulled the blankets back on his bed, there was the dirty sheet. Grossed out and grumbling, he slept on it for a week!