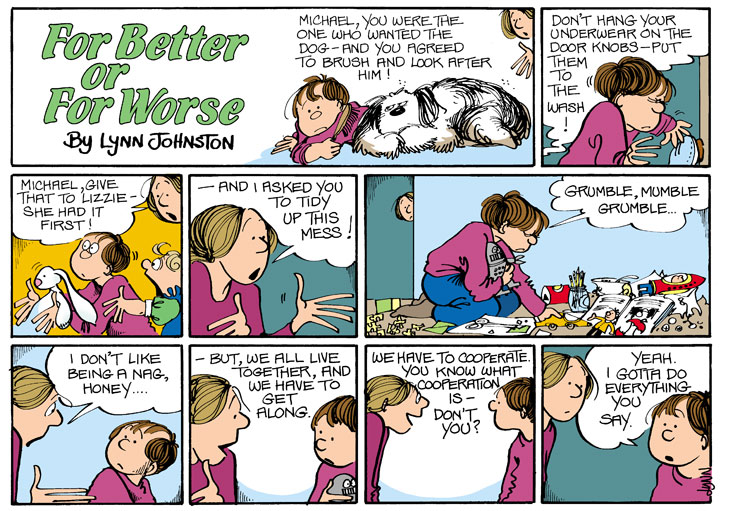 In Books: In The Beginning, There Was Chaos, It Must Be Nice to Be Little, Suddenly Silver
Daily or Sunday: daily
Items: puzzle 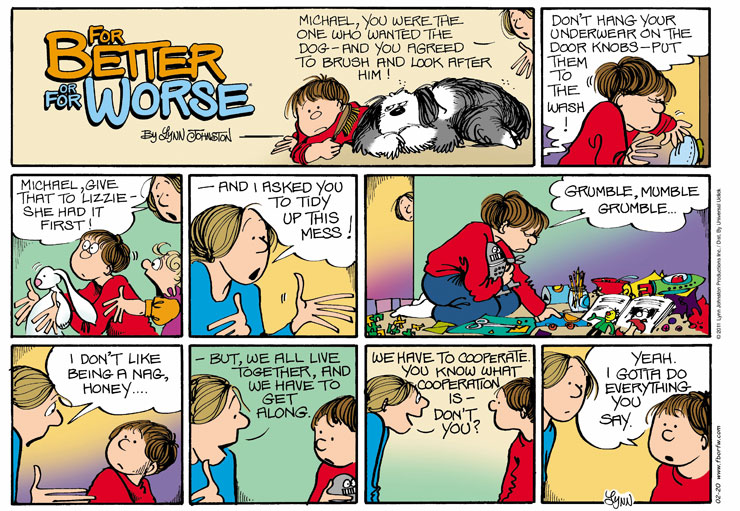 Lynn's Comments: My mother used to nag me constantly! Seems there was always something better to do than play or draw or watch television. The way I saw it, my room was my room and if I had to climb over a Vesuvius of moldering junk to find the bed I slept in, then that was my problem. Clean and ironed clothing was not a priority, nor was washing behind bodily protuberances. I longed for the day when I could do what I wanted to do, eat what and when I wanted to, have my own space, my own money and my own rules. That didn't happen until I was 20 and married for the first time. Then, I amazed even myself. I became a stickler for cleanliness. My apartment was spotless. Clothes were immaculate, ironed and sorted into their exact compartments. The bed was made, the carpets lint free and the kitchen was a neat, organized workspace. It wasn't until I had children that I realized what a degenerate slob I had once been. Hovering over my son as he miserably shoveled the crud out of his bedroom, I could hear myself nagging...with the same tone of voice, using the same language my mother used. Time and time again I promised myself I would not turn into my mother and here I was saying the same darned things - with the same predictable response. Years have flown by. Both of my children have homes of their own and it amazes me to see that they live in clean and tidy environments. I guess, in the end, nagging pays off. My mother, had she lived to see this day, would have been both proud and vindicated!

Lynn's Comments: Having a long distance relationship with my family was difficult. I was getting to know my in-laws very well and the kids were at home with everyone on "the other side of the family", but I missed my own. Both of my parents were creative and would have been happy to play a larger role in the children's lives, but time and the cost of travel separated us. Every visit was filled with activities and the time always flew by far too fast.

In Books: In The Beginning, There Was Chaos, It Must Be Nice to Be Little, Suddenly Silver
Daily or Sunday: daily
Items: puzzle

Lynn's Comments: The Enjos provided both Elizabeth and Michael with friends to play with--I wanted the whole family to integrate with the Pattersons. This is always the hope when new folks move into the neighbourhood, and I could make it happen in the strip!