In Books: In The Beginning, There Was Chaos, It Must Be Nice to Be Little
Daily or Sunday: daily
Items: plant, tissue, toilet, toilet paper, toothpaste 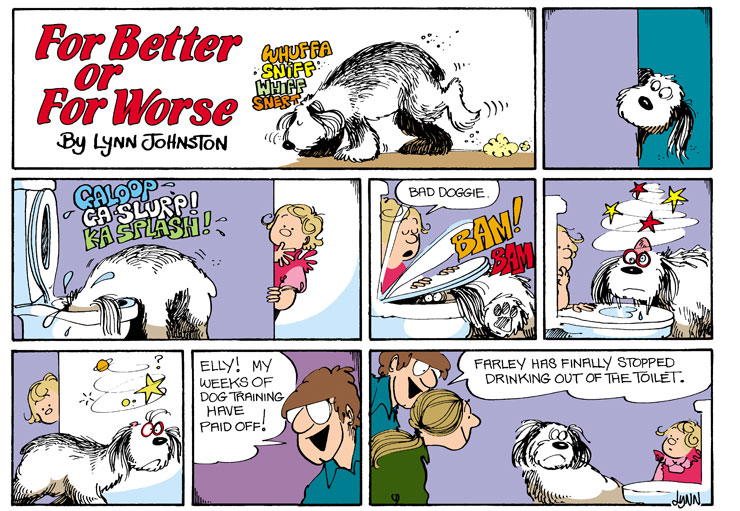 In Books: A Look Inside...For Better or For Worse, In The Beginning, There Was Chaos, Our Sunday Best, Suddenly Silver
Daily or Sunday: sunday
Items: toilet 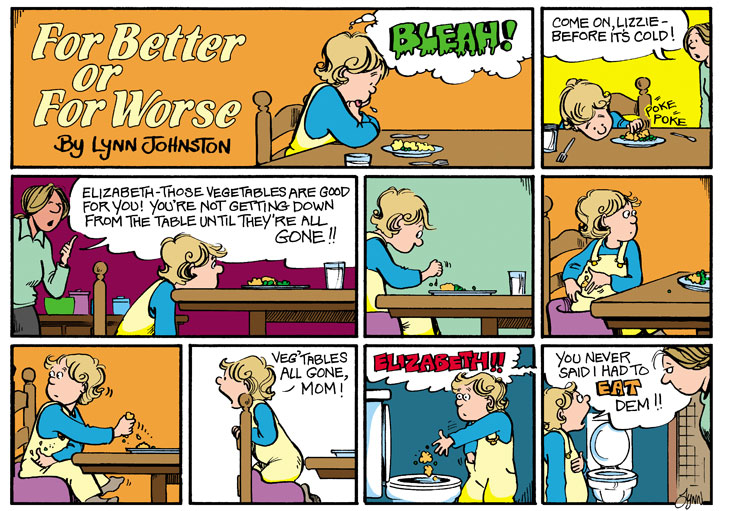 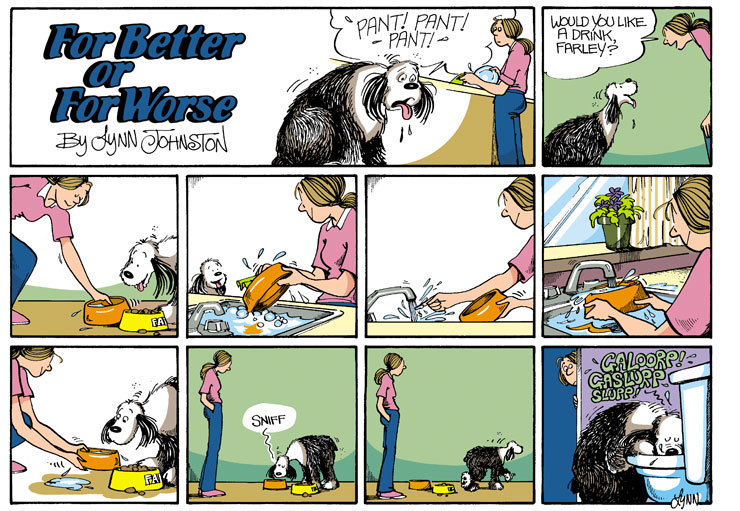 In Books: All About April, There Goes My Baby!
Daily or Sunday: daily
Items: book, toilet 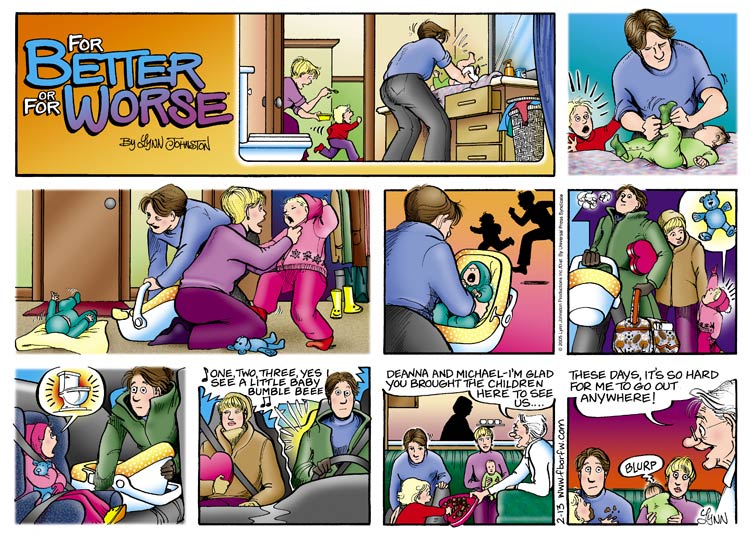 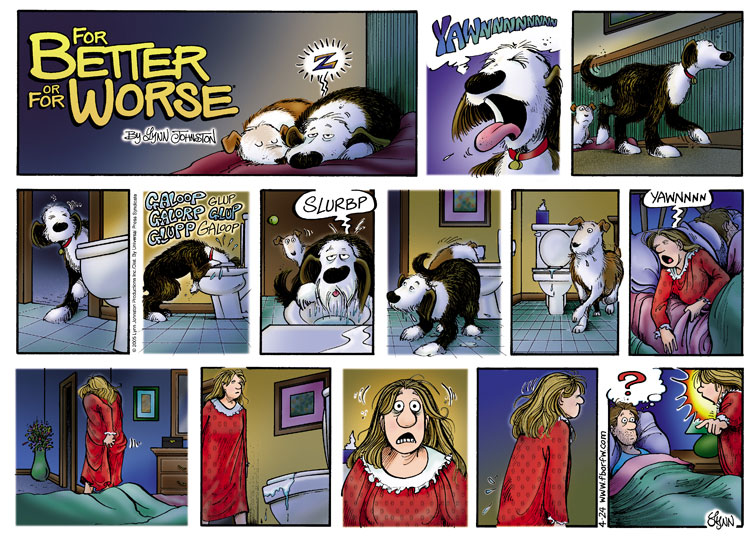 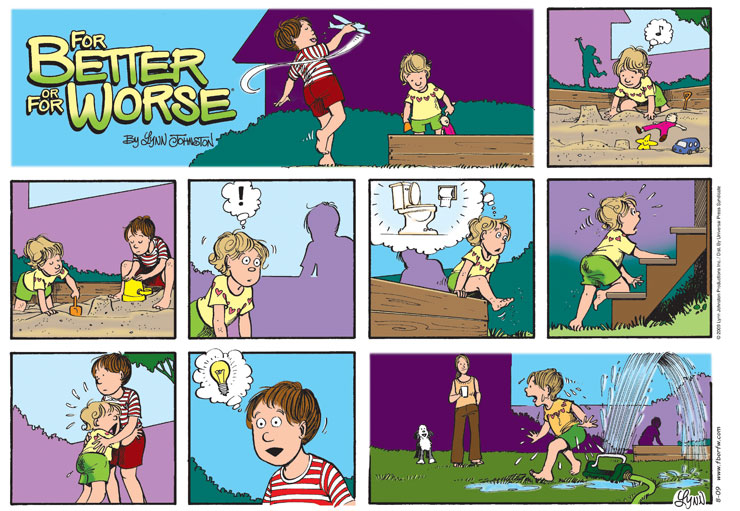 Lynn's Comments: Katie loved toothpaste and heaven knows we had access to lots of it. One morning, I was making the beds and she was playing in her room. Between the two rooms was our upstairs communal privy - a place which held endless fascination for both kids. What with a tub for water sports and a porcelain receptacle - guaranteed to "disappear" stuff - the bathroom was, hands down, the room of choice for indoor recreation. Above the sink our hard-to-reach medicine cabinet was filled with forbidden fruit and although it wasn't locked, it took some jungle athletics to reach it and a strong pull to get it open. Believing she was dressing up dolls, I continued to putter until "mom's 6th sense" kicked in. I decided to check on my youngest offspring. Katie, having opened the biff- cabinet drawers like a staircase, had achieved the countertop plateau and was trying to open the medicine cabinet. This wasn't the only thing I discovered. An entire tube of toothpaste had been squeezed onto virtually every surface of the room and she was on a mission to find more. I removed her from the scene of the grime, called my mom-in-law and spent the rest of the day cleaning out the can. Every cloud has a silver lining, they say - and the good thing about this event was... the bathroom smelled great for weeks afterwards!

In Books: In The Beginning, There Was Chaos, It Must Be Nice to Be Little
Daily or Sunday: daily
Items: plant, tissue, toilet, toilet paper, toothpaste 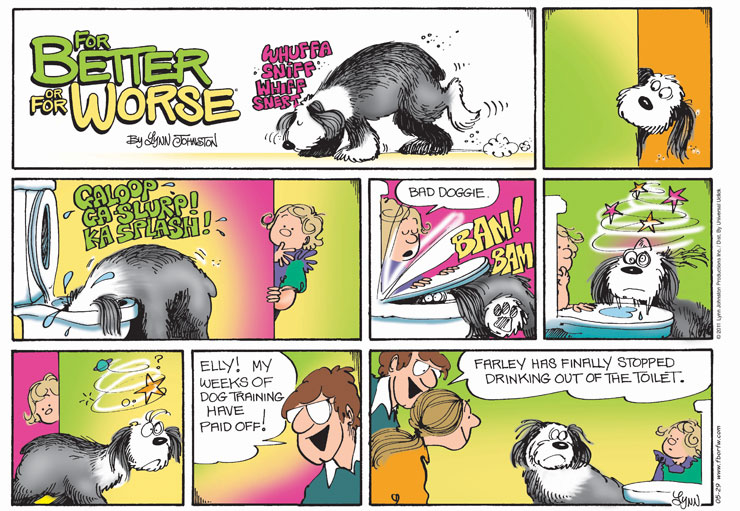 Lynn's Comments: Like most dogs tall enough to reach the porcelain receptacle, Farley enjoyed a "fresh" cool swig from the commode. The sound of his lapping was intensified by the shape of the bowl, so the "slorping, galooping" effects were as entertaining as he was. What I did object to was the trail of water that poured from his hairy mug when he left the bathroom. I was more concerned about cleaning up after him than I was about his choice of water sources. I kept the biff pretty clean and besides - dogs chew on every disgusting thing they can find anyway. I tried to keep the toilet seat down, but living with men rather thwarts any success there. The trail of post-refreshment liquid really got me down, but I lived with it for the love of Farley. The head-bashing incident belongs to a friend who told me that her three year old son decided to take matters into his own hands after hearing his mom complain about this same problem. She was shocked to find him smacking the family pooch on the noggin as he drank from the toilet. She gave her son a lecture about abusing animals and sent him to his room for a time out. Later she confessed that despite her son's unkind behaviour...the dog had been cured of a bad habit. In other words, he had "put a lid on it"!

In Books: A Look Inside...For Better or For Worse, In The Beginning, There Was Chaos, Our Sunday Best, Suddenly Silver
Daily or Sunday: sunday
Items: toilet 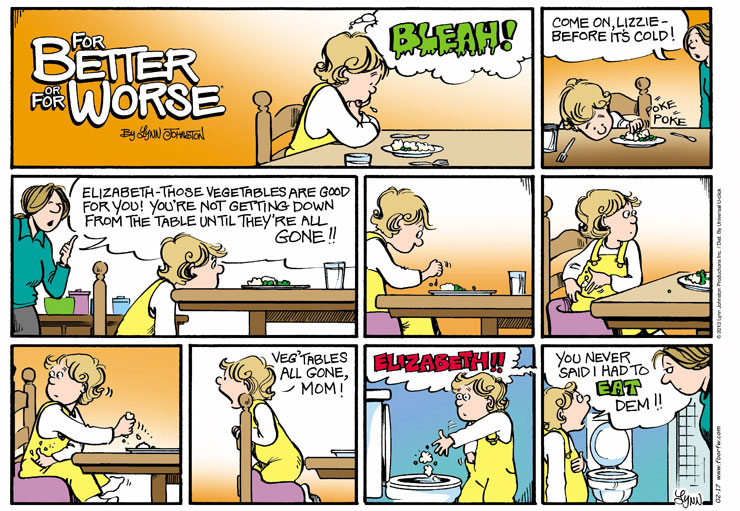 Lynn's Comments: There was a law in our house: if you didn't like what was on your plate, it didn't matter--you had to eat it all. This rule was enforced unless we were too sick to sit there or were absent altogether! My brother, Alan, was always trying to escape the likes of cold creamed peas, canned corned beef, or liver in gravy. He would hide a wad in his pockets or the cuffs of his pants and, convincingly full, would leave the table.

Once he was being so gross at dinnertime, he was sent to his room to eat. He went happily and returned minutes later with a suspiciously empty plate. He said he had eaten everything, but there was evidence to the contrary; the gravy was scraped to the side of the plate and the toilet had just been flushed. With her hands on her hips, Mom accused him of lying, but he stuck to his story. It was his word against the gravy. She gave him "the glare" but he stared her down. Mom dragged Alan to the biff. She wanted to scope out the scene of the crime but found nothing to pin on him. The gravy trail was the only real evidence; the one thing that could trip him up. With Alan's ear between her thumb and forefingers, she marched him brusquely back into the kitchen to resume her interrogation...and found our dad happily washing the dishes. The accused's plate was clean. From that day on, the rule was altered to allow for differences in tastes and appetites. Once again, Alan had defied our mom, and Dad was a hero. Until then, even HE had to eat stuff he hated! 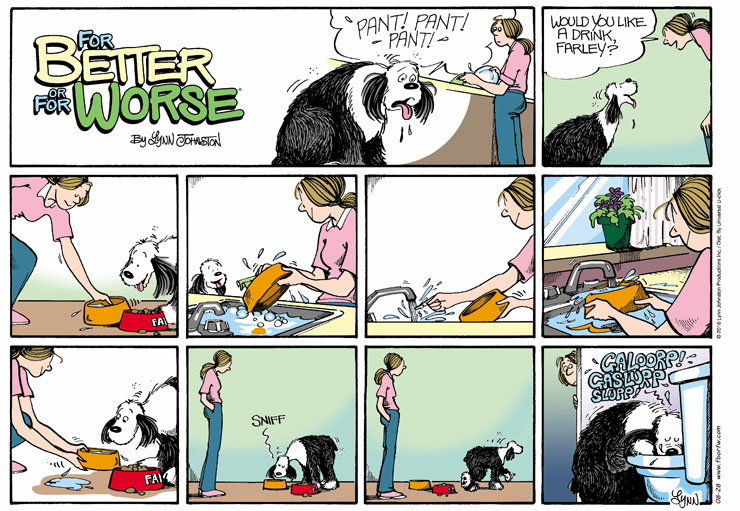