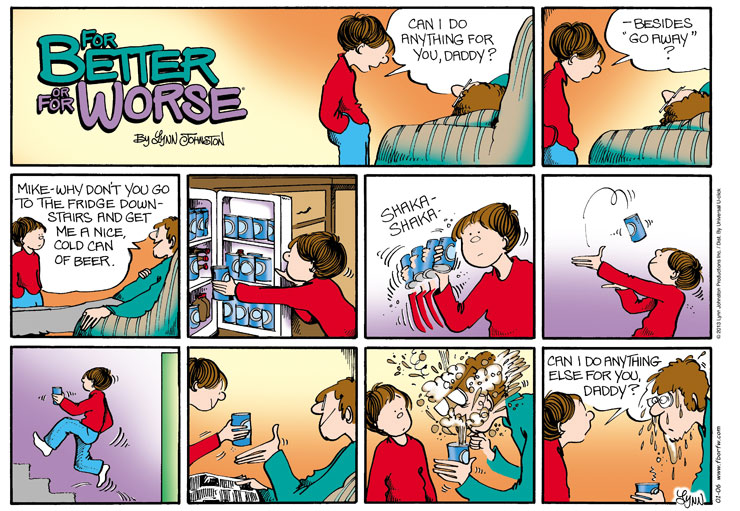 Lynn's Comments: This scenario comes from my childhood. We never had pop or beer in our fridge--it was just too expensive. When my friends and I were old enough to go to the corner store on our own, we'd spend our allowance on a coveted bottle of Coke or Orange Crush or my absolute fave; cream soda--and we'd savour every drop.

One day, my friend Marian and I decided to buy one bottle of cream soda and a bag of penny candy and split them both. We rode our bikes back to my place, poured half the pop into a small, clean plastic detergent bottle, and drank the rest. It was a warm day so we decided to ride up to Lynn Valley Canyon and have a picnic. It took awhile to get there and by the time we arrived, we were hot and dry, and keen to take out the pop and candy. We leaned our bikes against a post and retrieved the stuff from the basket on my bike. Despite the heat, the candy was un-melted, but the once flat-sided detergent bottle was absolutely round.

With all the caution and forethought that young kids are known for, I twisted the cap as I raised the bottle to my mouth. The cap blew off hitting me in the forehead as a paint-peeling blast of cream soda smacked hard between my eyes. It was in my hair and up my nose. I was covered with it. The foam seemed to come out of the bottle for ages, and when it died down, there was still a bit of liquid in the bottom, which I gave to Marian. After all, we were supposed to share. We left our bikes, opened the candy, and walked across the swinging bridge. My clothes were already gluing themselves to my chest. I could feel the stickiness pulling at the skin on my neck. Everything smelled of sickly sweet cream soda. My hair was full of it. ... My mom would KILL me!

At the end of the path on the far side of the canyon, was a deep pool where the water fell from an outcrop above. We called the pool ,"Thirty Foot." It was the openly secret swimmin' hole for every kid on the North Shore, and by today's standards, would have been considered too dangerous and cordoned off. I hadn't planned to go swimming, but by the time I'd hiked down to Thirty Foot, I was miserable. I didn't think twice. I went to the edge of the pool and jumped in.

I think that's the first time I ever went swimming with all my clothes on. I was wearing shoes, socks, shorts--everything--and it felt wonderful! Marian decided to jump in, too, but took her shoes off first. Smart move. With other kids arriving to cool off, we couldn't strip to let our clothing dry so the wet walk back to the suspension bridge made us filthy, and soggy shoes made for an even more uncomfortable ride home. I remember everything about that day--especially the bomb in the bottle. I never yearned for a cream soda after that, and any fully clothed plunge now has to be near a change room. In wanting to show pop at its most powerful, I decided to create a Sunday strip rather than tell my soda story. It would have taken far too long!