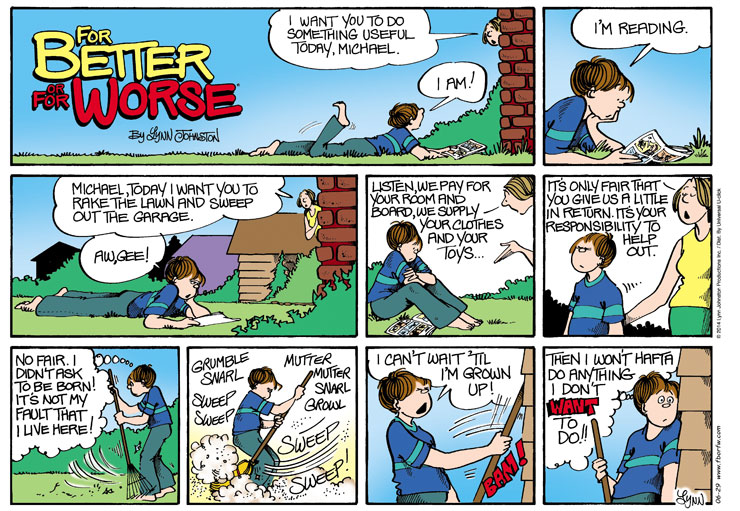 Lynn's Comments: Chores were a given around our house when I was a kid. In fact, all the kids I knew had to do something to earn their allowance. It was so unfair. I remember thinking how lucky my parents were to have so much power and freedom. They could, if they wanted to, go anywhere without having to say where they were going or when they'd be back. They had money and jobs and a car. My brother and I were servants! We had do what they wanted us to do, be where they wanted us to be, say what they told us to say, and work! I remember snivelling about how hard it was to pile firewood, weed the garden, sweep the walks. Torture. It was TORTURE!

So, when it was my turn to have the upper hand, I told my kids that it was their duty to help around the house. I gave them a chore list and a deadline. They snivelled and complained, and said the same stuff (behind my back) that I said about my folks. They said how lucky I was to be the boss, to have freedom and power and money. They said how unfair I was and how mean! It took patience, strength and perseverance, but in the end, they too learned to pitch in and lighten the load.

Now my daughter has two kids, and the oldest (age two) complains about having to pick stuff up and put it away. Yeah, the best thing about being a grandparent is watching your kids deal with their kids--who are doing the same stuff they did to you!!