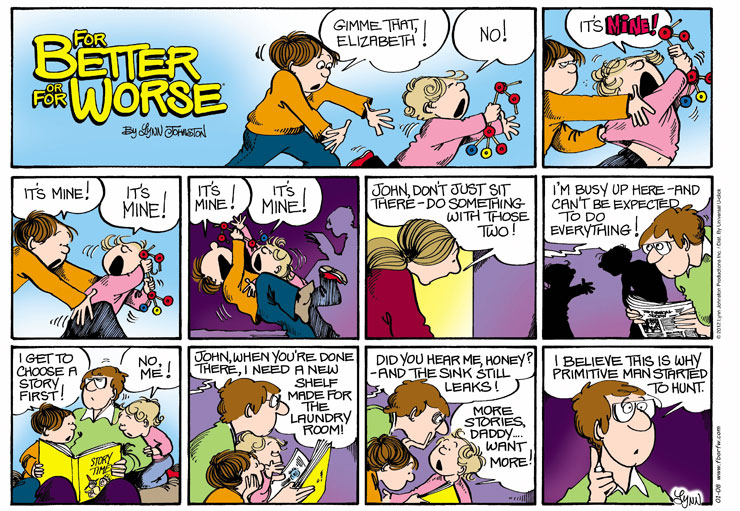 Lynn's Comments: Settling disputes between the offspring usually fell to me and there were times when I had no patience left to work with. I was so tired of the constant, petty squabbles to care. If the kids could go outside, they'd be too occupied to start a row, but inside, the tug-of-war waged on and I would often be at the "end of my rope".

I would envy the guys who disappeared into their workshops to "get stuff done". It was hard to deny them the time they spent over an oily valve or a piece of lumber or a broken pipe. This was, after all, essential to the household maintenance. The cool, quiet ambience of the workshop was a perfect place to spend an afternoon. Guys dropping by to give advice or lend a hand were welcome. They'd lean comfortably against the doorframe, chewing the fat, and hoping for a beer to materialize. Sometimes they even got sandwiches and cake! It might take a day to fix a gadget or repair a hose--time well spent according to the men folk, but... an entire day?!!

Some of my friends had hunter/fishermen in the family and when the weekend came, their men folk would go off to the call of the wild. The women kept the home fires burning and the small fry in line. When we came into contact with each other, we'd compare notes about the absent spouses. What did the guys REALLY do while we held down the fort? Mystery loves company. So, while I went along with the social flow, I resented it as well. Situations like this found their way into For Better or For Worse and I was always comforted by the responses from other moms who said, "That happens at OUR house, too!" It was wonderful to know I wasn't alone.

In Books: In The Beginning, There Was Chaos, Our Sunday Best
Daily or Sunday: sunday
Items: storybook, tinker toys, toy