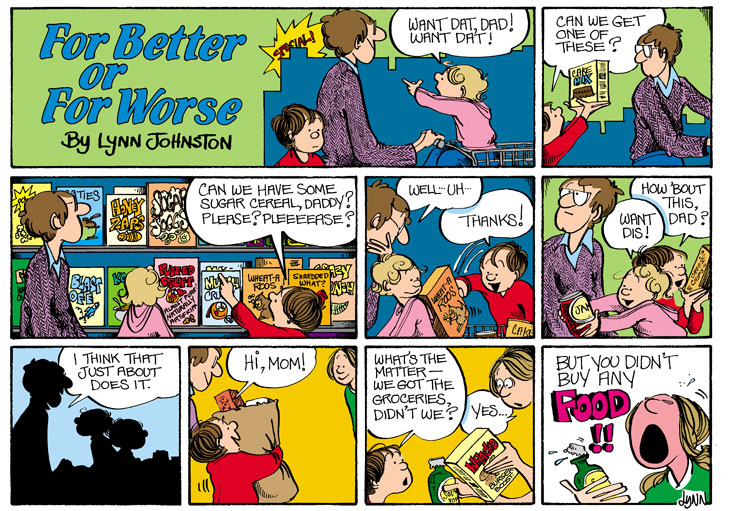 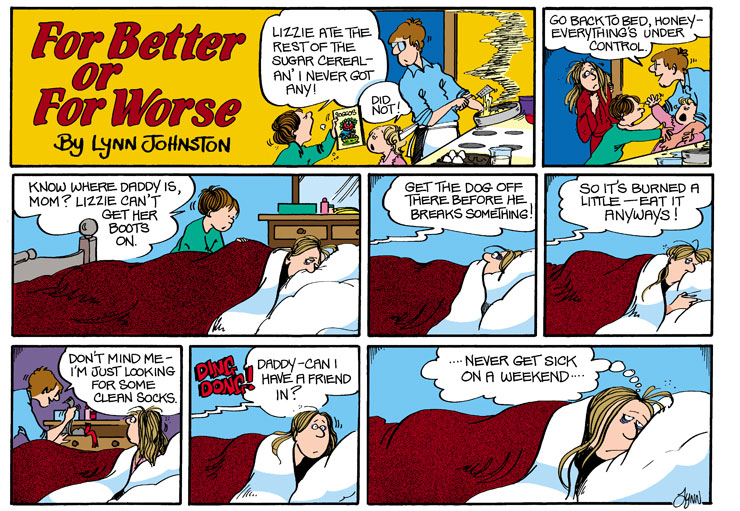 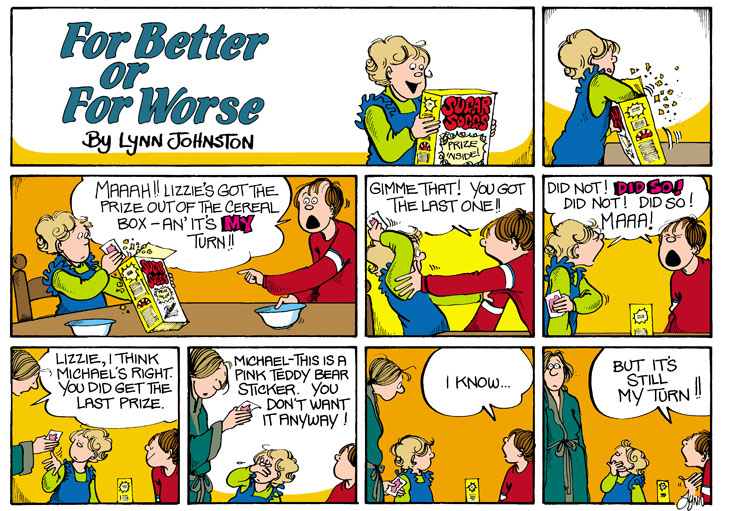 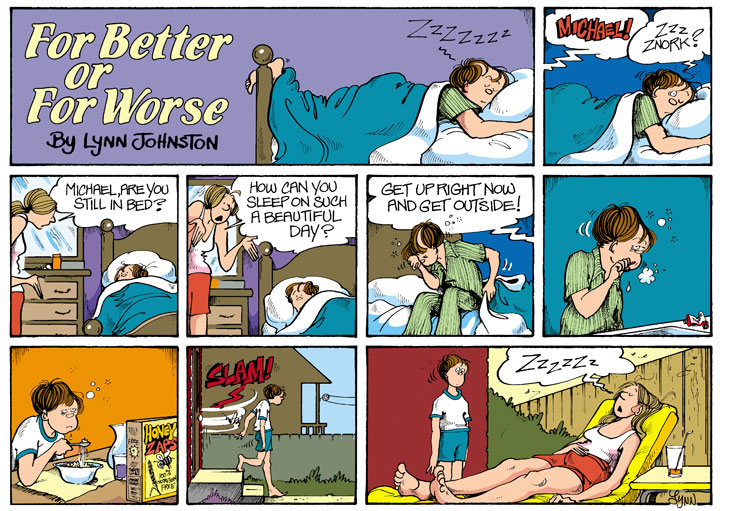 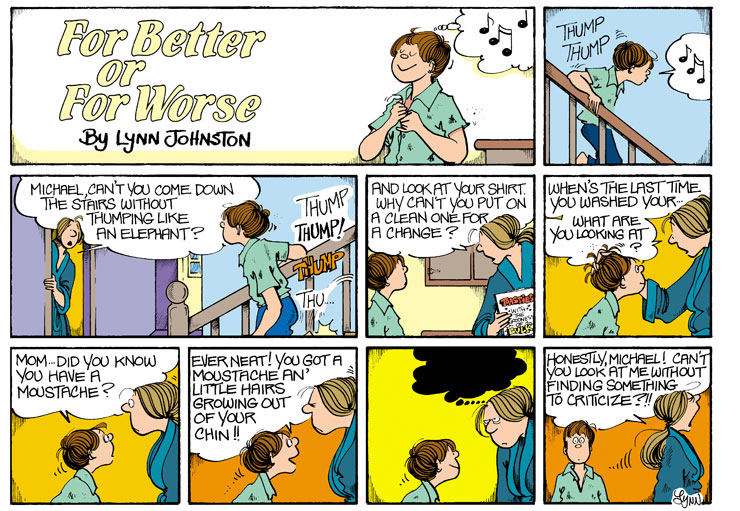 In Books: It's All Downhill From Here
Daily or Sunday: daily
Items: cereal, cup of coffee, pitcher, pot of coffee

In Books: If This is a Lecture, How Long Will it Be?
Daily or Sunday: daily
Items: cereal, stereo

In Books: If This is a Lecture, How Long Will it Be?
Daily or Sunday: daily
Items: button, cereal, mess 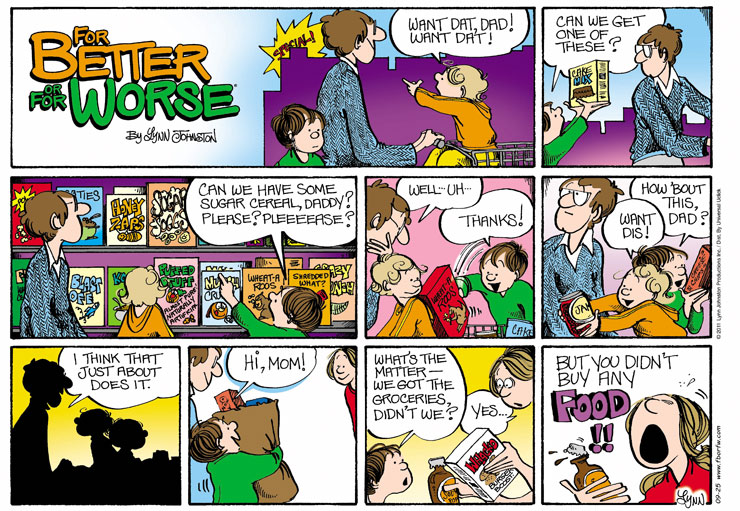 Lynn's Comments: This is another example of something I just made up. In fact, I don't remember my husband taking the kids to buy groceries - this was my job and I enjoyed it. This is a gag that I knew had been done by other cartoonists, and yet, I did it again. 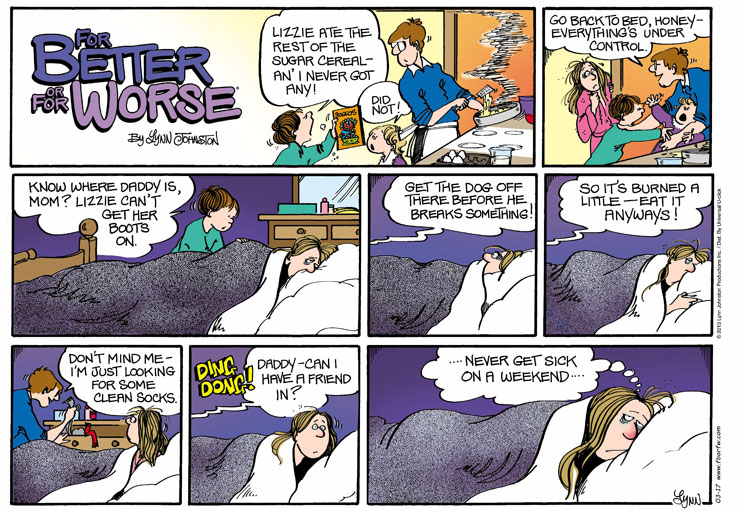 Lynn's Comments: This is another strip that brought in the mail. "Never get sick on a weekend" could have been the title of a book as stories of interrupted sleep, well-meaning remedies, and all the things a mom still has to attend to despite fever and chills, came rolling in. No matter what I was going through, the letters I received told me I was far from alone!

Lynn's Comments: Earlier in my career, when I was a single mom, I worked outside the home and Aaron went to daycare. Any time he was sick, it was miserable for both of us. I knew, it was irresponsible to send a kid out there to infect others, but I had to pay a mortgage and buy groceries, and a day off work meant a smaller pay cheque. If I had to stay home with him, I felt guilty for missing work--and mad at myself for feeling guilty. He, on the other hand, appreciated having me home--all to himself and caring for him.

Lynn's Comments: When my paternal grandmother came to stay with us for 6 months, I was 16 and very independent. My parents both worked, so it was my job to get the dinner on and Gram's appearance in the kitchen was "one too many cooks!" She had just lost her husband, was lonely and depressed, and my dad had invited her to stay. Having spent her adult lifetime looking after others, she naturally put herself to work--on my turf! From the day we set eyes on each other, we were rivals. Gram had my bedroom. I was sleeping in the basement in a "room" made of plywood boards and a curtain. I resented this terribly. I resented her teeth in a glass on my dresser and her clothes in my closet. I also resented being told what to do by someone other than my parents, and her criticism irritated me beyond belief.

One day I saw her fidgeting with the oven. It was a gas oven, and she wasn't familiar with the way the oven worked. When I tried to tell her how to do it, she barked at me to mind my own business, that she knew how to operate an oven, and to get out of her way. Figuring this would be a great opportunity to see what would actually happen if you lit the oven the wrong way, I crossed my arms, leaned against the doorway, and watched. First she turned on the gas. The oven door was closed. Interesting. Then she looked for a match. She found the matchbox on the wall and took out a match. She went to the stove, struck the match on one of the elements and opened the oven door. Well--Ka-BOOOOOMMMMMM!!!!!! The explosion blew Granny across the room. She wound up on the opposite side--sitting on the floor with her back against the cupboard doors. Her eyebrows were gone, and all the hairs on her chin were frizzled black. The best thing of all was the look on her face. Her mouth had formed a little "o." I was thinking, "Wow! So THAT's what happens!" It took a few seconds before I reached out to help her up, and a few more for us both to realize that she could have been very seriously hurt! With grateful relief, we hugged each other, and for the rest of her stay, we held a truce. 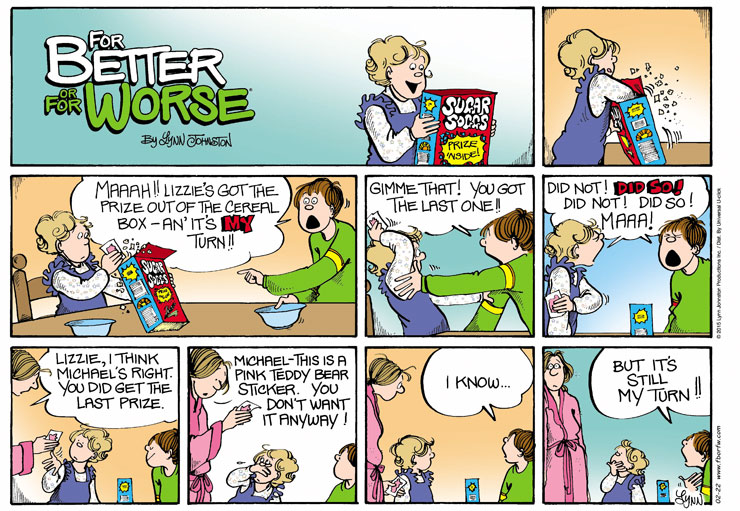 Lynn's Comments: I have always loved making up names on things like cereal boxes. In art school, one of the things we had to do for commercial design was to come up with an entire cereal box--from the size to the ingredients to the illustration on the cover. This meant we had to figure out how much space we needed for type (in two official languages): brand name, logos, contents, weight, nutritional value, and directions. Packaging is a whole industry of its own, so this was a really good exercise. The cereal I came up with was "Sugar Soggs." The art showed a kid eating some gruesome candy-coated gruel. It was okay, but the best design was done by one of the guys in the class; he called his cereal "Uncle Brian's Grumpies." On the cover was a grimacing caricature of the instructor, whose name was Brian, and the ingredients he made up were hilarious. In terms of funny, he had me beat by a mile. Neither of us got a good mark because we hadn't taken the project seriously. It seemed to us that despite the prof's objections, cartoons do sell!

Later, when I worked for Standard Engravers, a packaging firm in Hamilton, Ontario, I was given the opportunity to design a giveaway on a cereal box. I thought this would be neat, until I was given a space about 2 inches square on the bottom right corner. This was a real challenge--and that's good. If you give a cartoonist or graphic artist a blank page and say "draw something," they have to think for a while. Give them a tiny, awkward space, and suddenly the ideas come out of the blue. A great example of this is Sergio Aragones' "marginals"--the tiny cartoons that tumble around the page borders in Mad magazine. When he suggested he be hired to do these, he was told that he'd run out of ideas. Some 45 years later, he's still producing them, and each one is wonderfully different.

For the small corner space on the cereal box, I designed finger puppets, pencil toppers, decals, and "spinners" (a top made from paper). It was fun. I thought this could be a surprisingly satisfying career, but things went in other directions. I still get to work on cereal boxes but in a different way! 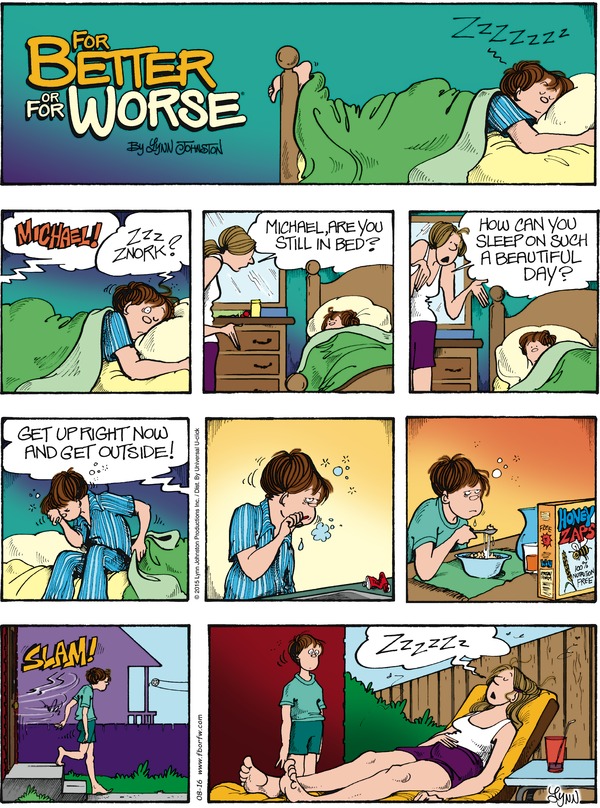 Lynn's Comments: This is a scene from my childhood. I liked being indoors. I enjoyed drawing and reading. Once I did go outdoors, however, it was hard to drag me back in. I remember my mom nagging me to get out and enjoy the sun and the summer--while it lasted. Seeing her asleep was a rare thing. She was one of those people who worked from sun up until sunset, and to find her relaxing anywhere was surprising. I think I'm a lot like my mother! 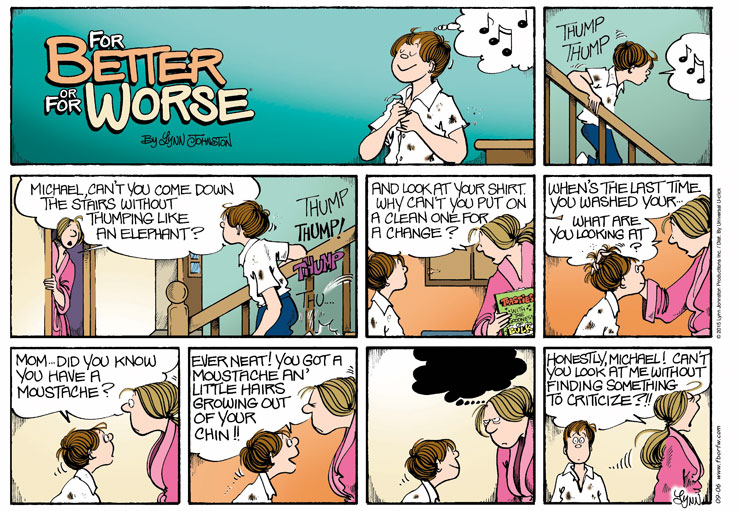 Lynn's Comments: This was a one-liner of which I was particularly pleased. Sadly, like so many remarks, word play and colloquial expressions, it could not be translated, so FBorFW remained an English only comic strip. Imagine the world of wonderful humour we would all enjoy if we could only understand each other's languages!

In Books: It's All Downhill From Here
Daily or Sunday: daily
Items: cereal, cup of coffee, pitcher, pot of coffee

Lynn's Comments: I've never liked the idea of the "elf on the shelf." He looks a little evil to me. On the other hand, an honest tattle works for everyone.

Lynn's Comments: The best part of a strip like this is making up the names of the cereals.

In Books: If This is a Lecture, How Long Will it Be?
Daily or Sunday: daily
Items: cereal, stereo

Lynn's Comments: One more thing that really happened. I began to think my kids and husband owed a huge debt of gratitude to the strip...which happily ate up anything I could make into a daily or Sunday cartoon.

In Books: If This is a Lecture, How Long Will it Be?
Daily or Sunday: daily
Items: button, cereal, mess