Lynn's Comments: Katie loved to play on the lazy Susan where I kept all my canned goods. As long as I could hear the rumble of the sturdily built shelves turning, I knew she was safe and not getting into trouble--so I thought. As she rode around one day, she amused herself by removing all the labels from the cans. We had mystery meals for months afterwards! 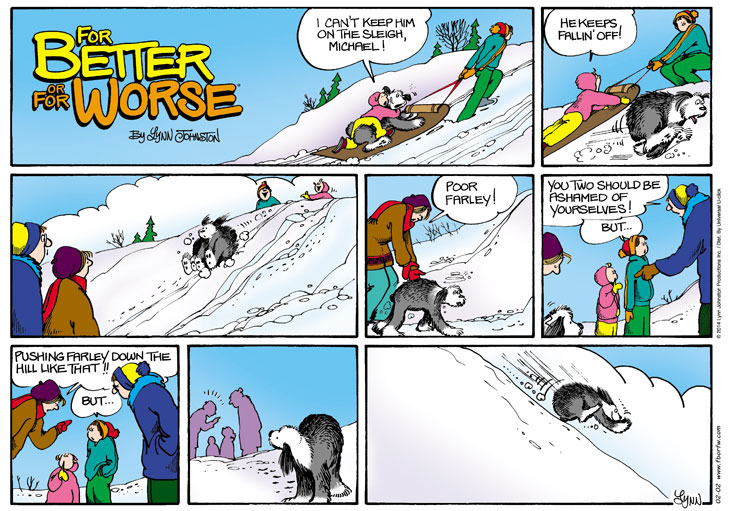 Lynn's Comments: We got Farley as a puppy in the fall. The first snow was so much fun. Like any baby, he was thrilled to play in it and would bounce into a snowdrift--right up to his ears. The ravine behind our house was quite steep, and in winter, we had no choice but to slide down if we wanted to walk along the creek at the bottom. Farley watched my husband and me slide down the hill on our toboggan, and with a little coaxing, he stepped forward, sat down, and slid all the way down, too. It was so funny, we laughed till we cried. All that winter, he would slide down the hill. We photographed him and made our friends watch. Summer came, and the following winter, we thought Farley would carry on sliding. He didn't. He had no interest at all in getting his seat wet and clogged with snow. I can't say that I blame him. We, at least, had protection! I guess it goes to show you that even dogs grow up and become sensible.

Lynn's Comments: As a new mother, with no one close by to advise me, there were times that I truly believed my son was"out to get me!" When you do everything possible to stop a baby from crying and they still go on and on and on, it's easy for a novice to think a baby does things like this on purpose. I came very close to shaking him one night and called my social worker the next day for help. I can see why some parents just can't cope--especially if they're on their own.

Lynn's Comments: When I got together with other young moms, we talked a lot about coping. We reasoned that the nine month gestation plus the difficulty in delivering a baby made the kid that much more "valuable," and therefore worth the added suffering afterwards. Frustrations were all forgotten, of course, when we looked at the faces of our clean, healthy, and sleeping offspring.

Lynn's Comments: Once my kids were toilet trained and could eat with cutlery, it was amazing how quickly I forgot everything I had learned about newborns and toddlers!

Lynn's Comments: This was obviously done before cell phones. Nowadays there's almost no excuse for not explaining late kid retrieval! 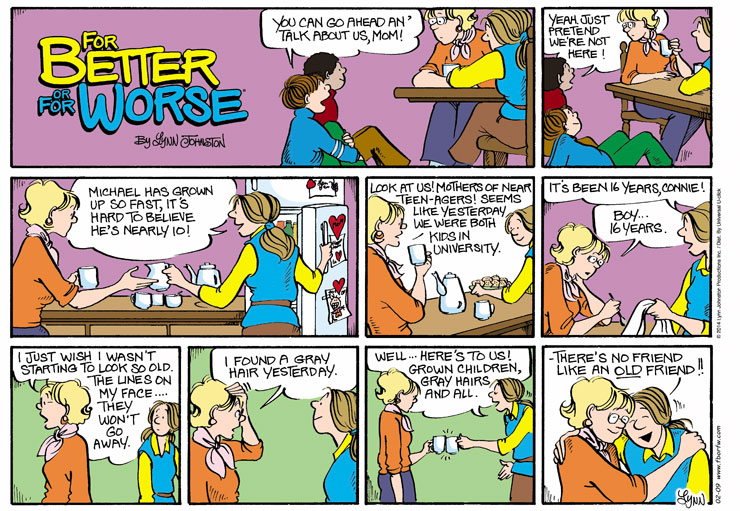 Lynn's Comments: This strip made me laugh today. How funny it seems to have worried about looking older then. Right now, I'd give my left eye bag for a smooth neck and a waistline!

Lynn's Comments: Here I used Letrafilm, the now archaic method of adding black and white texture to cartoons destined for the newspaper. This is a wood grain pattern, and after it came out in the paper, I realized just how badly it reproduced! Sometimes this way of adding depth to a strip looked fine on the original art, but when reduced to the printed format, it became blotchy, muddy, and rough. I was constantly learning about what worked and what didn't!

Lynn's Comments: I don't think schools go for the "give everyone in the class a valentine" any more--and I think it's for the best. Some kids in my elementary classes never got or gave valentines because their folks couldn't afford the bags of pre-cut cards. We couldn't either, but my folks always bought them because they wanted to spare us the humiliation of having nothing to give.

Lynn's Comments: My mom made the best cookies in the world. Her decorated sugar cookies could have won prizes for flavour and design. I haven't mastered her wonderful skill--because I just don't have the patience. Or, maybe it's just hard to see a work of art chewed up and swallowed!

Lynn's Comments: Our folks could never sneak up on us because there were so many squeaky floorboards in the hall. We, on the other hand, knew where each one was. 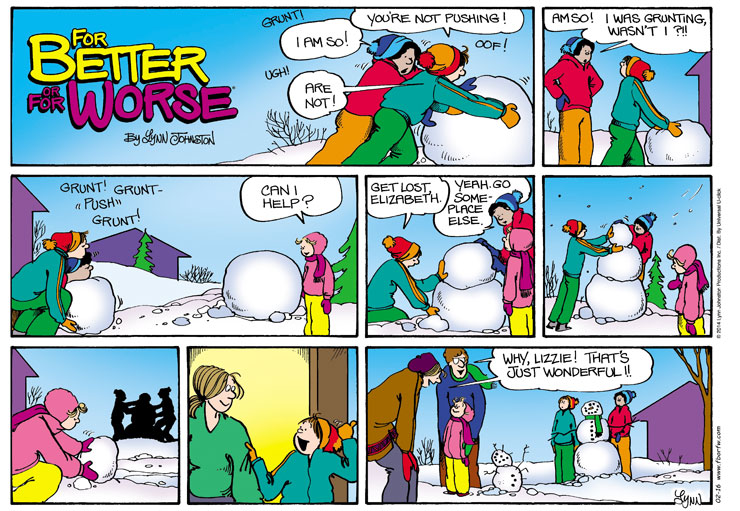 Lynn's Comments: The snow in Vancouver was rarely the right consistency for making snowmen, but when it was, every kid (and lots of parents) would be outside rolling and packing, and making the most of the best construction material there was. As long as a project was in progress, we were oblivious to wet knees, frozen mitts, and running noses. I remember my dad out there with a shovel making the best forts and the biggest sculptures. One week, the local paper featured a page of photographs of the most outstanding snowmen in North Vancouver -- and despite competitive efforts in every neighbourhood, the snowman that received the most comment was done by a three year old!

Lynn's Comments: I received many letters expressing thanks for showing a Jewish doctor in this strip. I also received a few letters of complaint! I drew the yarmulke--because I have Jewish relatives, my ex-husband and I were married in a civil service by a Rabbi (a great friend of the family), and I have always enjoyed Jewish humour. It was interesting to see how a small symbol of one man's faith could elicit such a strong response.

Lynn's Comments: When you work with the public all day you save your rants for the folks at home. I worked at home and ranted elsewhere. Perhaps this was a good thing!

Lynn's Comments: Here's a story for you: The province of Manitoba had just decreed that people trained as dental nurses would be licensed to do check-ups, cleanings, small fillings, and extractions on children. Rod's dental practice had expanded to include three First Nations villages, and he needed someone to offset the load. I was on my way to Winnipeg with Aaron (who had a doctor's appointment) when an interesting application came in. Debbie had very good references and was willing to move up to Lynn Lake. Rod asked me to interview her in Winnipeg, so Debbie and I arranged to meet in the hospital cafeteria while Aaron had his appointment. I sat at a table with a coffee and waited for Debbie to arrive.

Right on time, a stunningly beautiful girl with a long blonde hair, deep blue eyes, and a voluptuous figure came into the room, wearing a black low-cut cocktail dress. She put out her hand and introduced herself. I got her a coffee, and the interview began. Debbie was wonderful. I immediately liked her and knew she would work well with our team. I asked her if she could move up north as soon as possible. "You mean I've got the job?" she asked in amazement. "Absolutely," I said, "you are exactly the kind of person we're looking for." I watched Debbie as she adjusted herself in her seat. She was blushing. "There's just one thing I want to know," I continued, "why on earth did you wear a cocktail dress to this interview?" "Well," she smiled, "when I told my friends I was being interviewed by the dentist's wife, they told me I'd never be hired. So I decided to blow off the interview by dressing up!" I laughed. We both did. Debbie was not only beautiful, she had a wicked sense of humour. She worked for us for four years and was one of the best staff members we ever had.

Lynn's Comments: One of the things interviewers will often ask a cartoonist is, "Of all the punch lines you've written, which is your favourite?" and the cartoonist will typically say, "Well. I haven't written it yet." Or something like that. This is my favourite punch line! 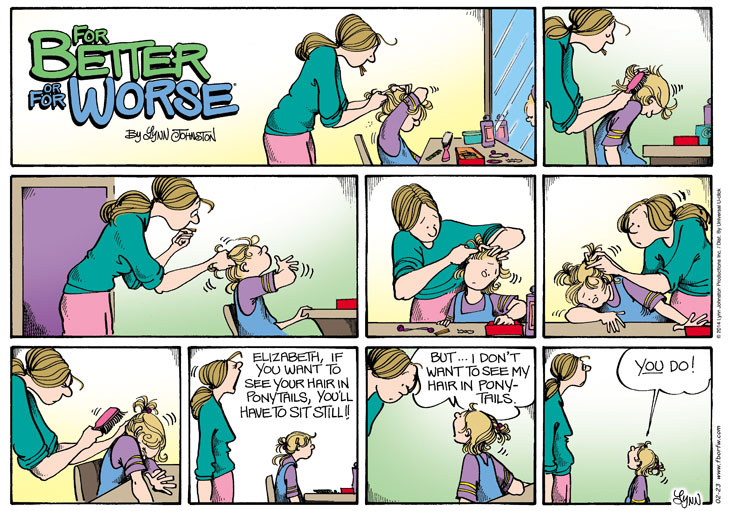 Lynn's Comments: My mom used to put my hair into what she called "bunches." She would pull my hair so tight, my eyes watered and the elastics made my head ache. When I had a daughter, I decided I wouldn't force anything like this on her, but I did want to learn how to do French braids. Kate wouldn't let me practice. No matter how I approached the subject, she was uninterested, until I offered to PAY her to let me braid her hair. Eventually this didn't work, and I gave up. I figured that I'd never see my girl with her thick, dark tresses in a hairstyle I loved. Until one day, she appeared with a perfect set of French braids, neatly tied together with a white bow. She had done them herself!

In Books: A Look Inside...For Better or For Worse
Daily or Sunday: sunday
Items: brush, ponytails

Lynn's Comments: I was complaining to a friend once about the number of times a week I had to drive my son to hockey. She reminded me that where I lived the arena was just a few minutes away, and where she lived, the drive was over an hour. She also had two sons and a daughter busily involved in competitive hockey. Her three practiced at all hours--morning and evening, and regularly travelled to neighbouring communities to play. I caved and gave her points for the best grumble. In comparison, my efforts regarding Canada's national sport were negligible.

In Books: The Last Straw
Daily or Sunday: daily
Items: box of snacks

Lynn's Comments: Another Daily strip that resonated. Mothers spend so much time and energy battling feelings of guilt and often about things that are entirely reasonable.

Lynn's Comments: Several librarians wrote to me to protest this storyline. Seems there are too many deserving people working in libraries with the right credentials to give an opportunity like this to a volunteer.

Lynn's Comments: Still, I wanted to do a storyline in which Elly got to travel by herself on a purposeful mission. I thought it might be reasonable to assume that her value to the library would lead to her going on this trip. Not so!