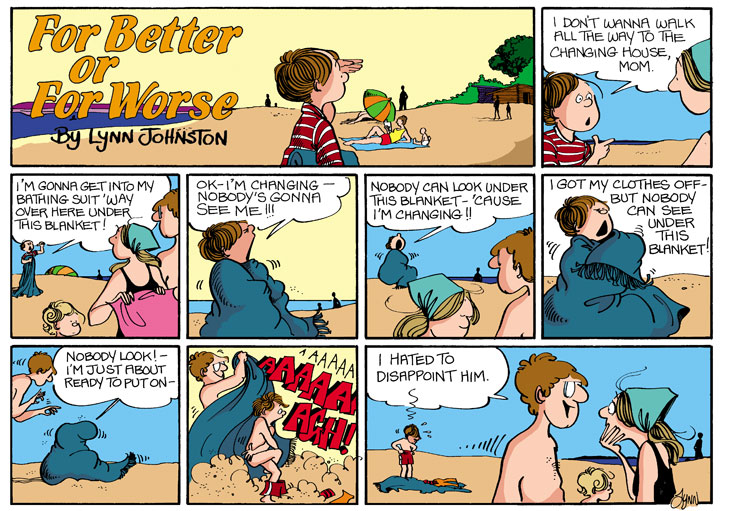 In Books: In The Beginning, There Was Chaos, Our Sunday Best
Daily or Sunday: sunday
Items: beach umbrella, blanket 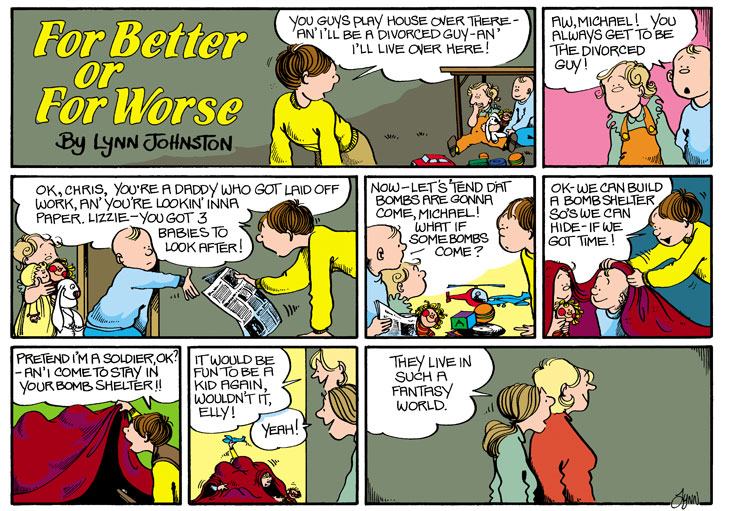 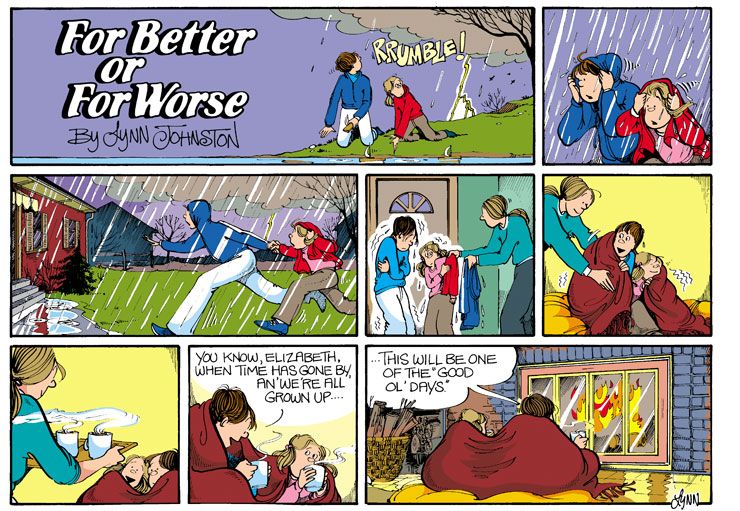 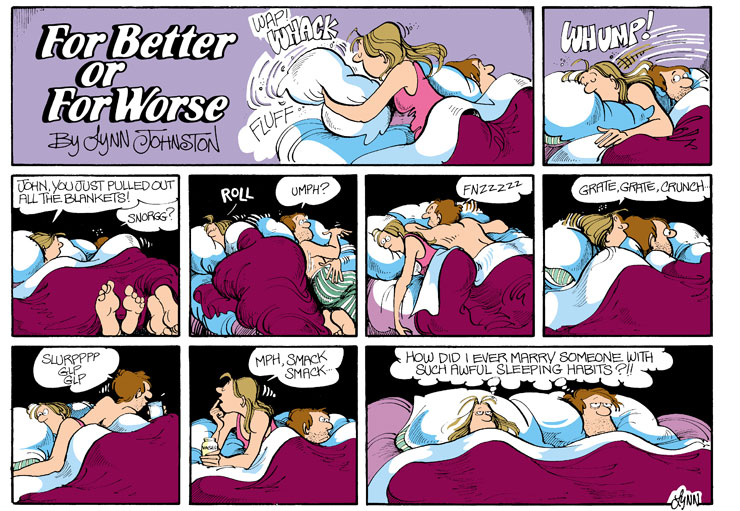 In Books: A Look Inside...For Better or For Worse
Daily or Sunday: sunday
Items: blanket, pillow

In Books: What, Me Pregnant?
Daily or Sunday: daily
Items: blanket

In Books: What, Me Pregnant?
Daily or Sunday: daily
Items: blanket, towel 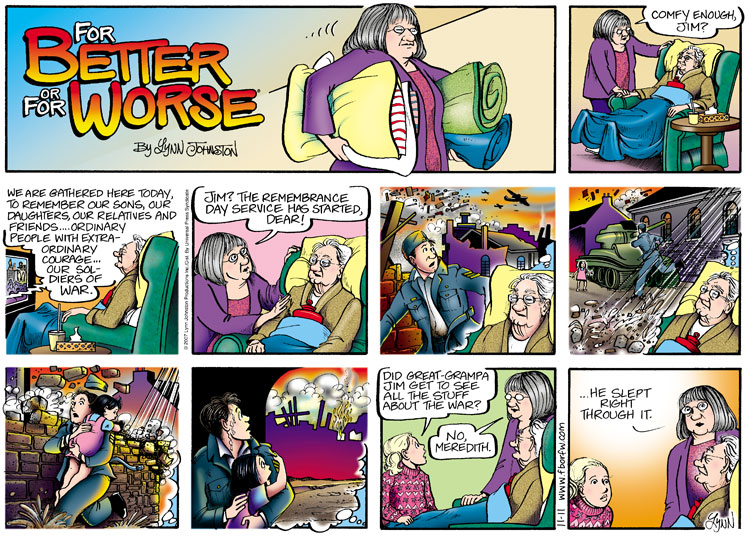 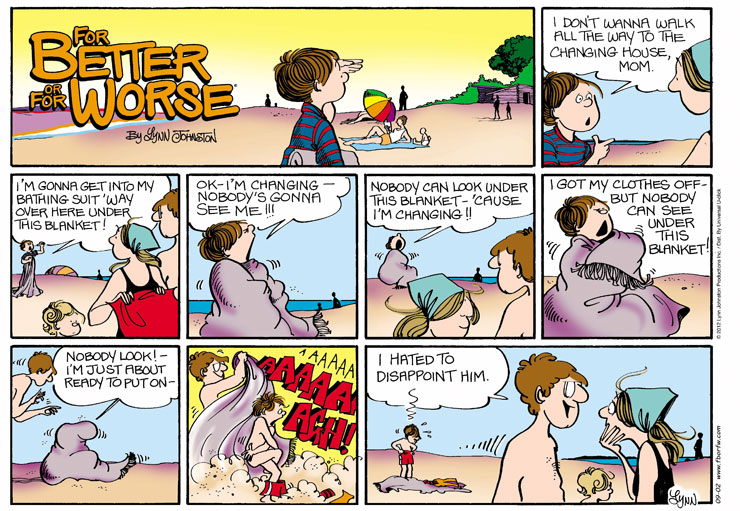 Lynn's Comments: Here is another strip that got me into hot water. Removing Michael's towel while he was changing was a reportable offense! The problem with a static image is the subtle elements, which would otherwise explain things, are not there. You can't show subtle things like eye movement, shrugs, knowing smiles, and reassuring gestures. The artist knows the situation is all in fun, but the audience does not. What should be funny is therefore sometimes misinterpreted.

As kids, we would change on the beach under our towels so fast that even the swiftest voyeur was unable to catch us in the buff. We'd yell out "I'm changing!!" just to goad someone into pulling off our towels. That's what kids do! Anyway, this ran and I knew as I saw it in print that I would soon be getting more mail. I learned another lesson... but then again, this job is all "towel and error!"

In Books: In The Beginning, There Was Chaos, Our Sunday Best
Daily or Sunday: sunday
Items: beach umbrella, blanket 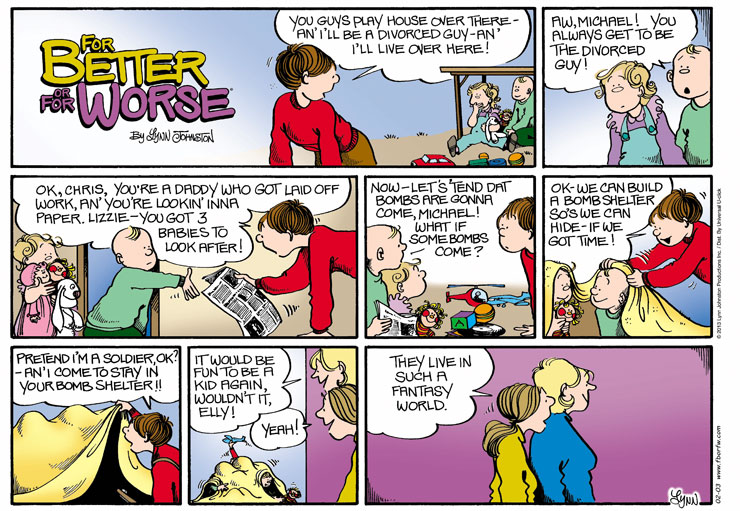 Lynn's Comments: The kids were never far away--I used to listen to their banter as they made up games, created forts in the living room, and played house. I was impressed by their ability to fantasize. I remembered my own childhood, when a mud pie tasted like the real thing, and if you rolled up in a blanket, you could fly. Even though we seemed to be "in a world of our own," we were still aware of our immediate environment.

Aaron, Katie and Aaron's friend, Roy, were playing one day, and some of their dialogue disturbed me--they were talking about bombs, murder, divorce, and other things they had heard about on television. This had to be absorbed, of course, and dealt with as much as any other experience outside of Sesame Street and Saturday morning cartoons. I worried that I was not talking to my kids enough. Later, when Roy had gone home, I asked them about their conversations, their ideas, and their perceptions. I felt good about being there to answer questions and explain some facts. In return, Aaron asked me if life was the same for me when I was a kid and I had to say that it was--we just didn't hear or see as much as they do now. We were far more protected from negative realities. When I think about it, we were really naive, and for that, I'm somewhat grateful!

I now have a grandchild. I see kids as young as two, happily using computers, eBooks, and iPads and I wonder how much more the babies of today are learning...too soon, too fast.

Lynn's Comments: This part of the story was entirely made up. This is what's fun about a comic strip storyline--the possibilities are endless. This is where the ability to fantasize comes in: a fantasy could take me completely away from reality--to places I didn't even know I could go! 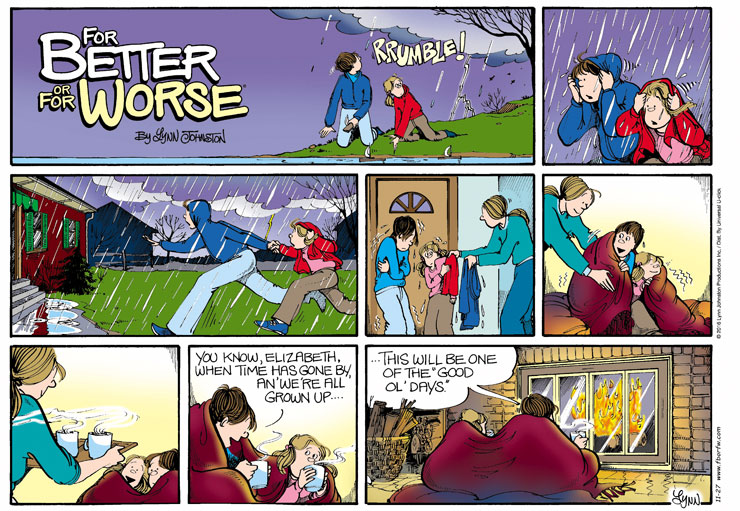 Lynn's Comments: There were times when we lived in Lynn Lake that I just couldn't get warm. I wrote this strip as soon as I'd served the hot chocolate.

Lynn's Comments: I’ve always liked the word "hark." I don't think we use this, or "hasten," nearly enough.

Lynn's Comments: This was an opportunity to make an important observation, I hoped, without sounding preachy. There are serious things a cartoonist wants to say; the challenge is in choosing the right time and the right way to say them. 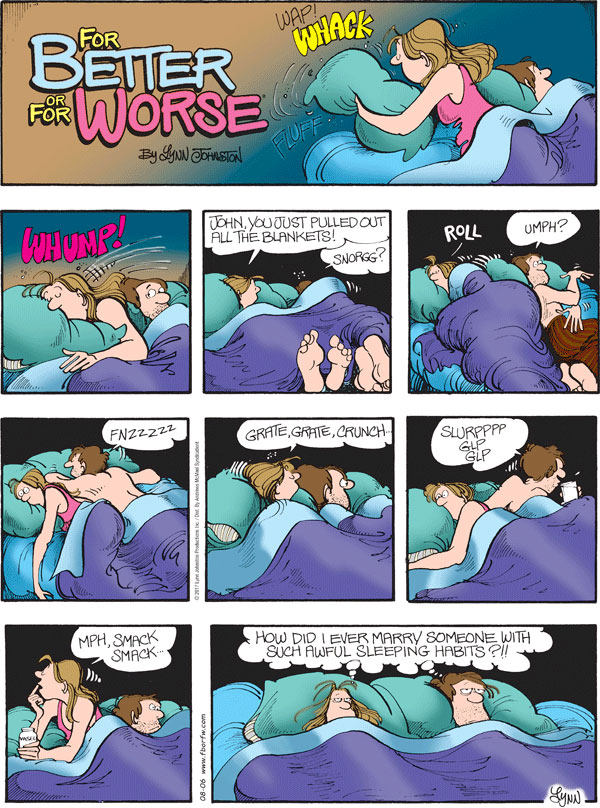 Lynn's Comments: King-sized beds were invented for a reason. Our bedtime habits truly establish our tolerance threshold. If you are OK with your partner’s sack-time etiquette (or lack thereof)…then you might be destined for a long lasting relationship. If not, you are doomed. King-sized beds and separate bathrooms have been touted as saving graces. I wouldn't have dreamed of separate bathrooms until this luxury presented itself in my most recent living space. Yes…give me a home where the buffalo roam, but make the privy a two-holer!

The strip you see here was inspired by a friend of mine. He once complained to me about his wife’s ability to swipe all the blankets in her sleep: she would roll toward him, tucking the blanket under her side. Then she would clutch the top of the remaining blanket and roll the other way, pulling everything with her. He called it "The Russell roll." (Russell is her maiden name). I thought it would make a great strip…but this is how the muse made it turn out.

In Books: A Look Inside...For Better or For Worse
Daily or Sunday: sunday
Items: blanket, pillow

In Books: What, Me Pregnant?
Daily or Sunday: daily
Items: blanket

Lynn's Comments: Whenever I had a crush on a boy, my imagination would lead me to a scenario much like this…but, minus the other people.

In Books: What, Me Pregnant?
Daily or Sunday: daily
Items: blanket, towel