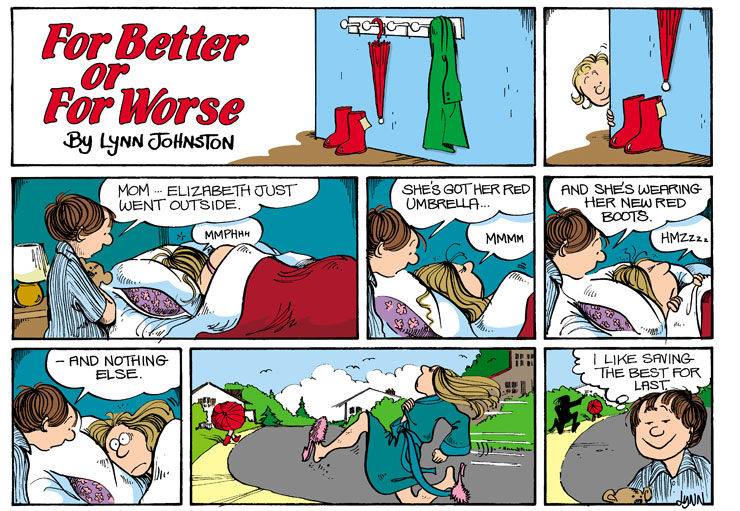 In Books: A Look Inside...For Better or For Worse, In The Beginning, There Was Chaos, Our Sunday Best, Suddenly Silver
Daily or Sunday: sunday
Items: boots, coat rack, fuzzy slippers, lamp, raincoat, umbrella 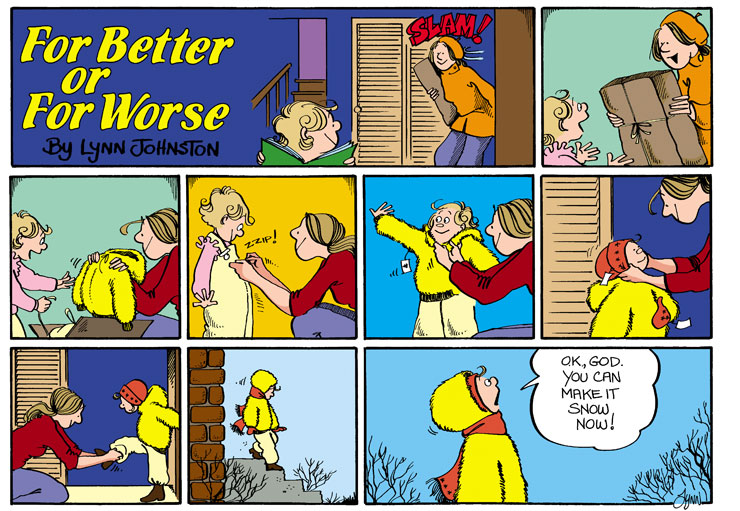 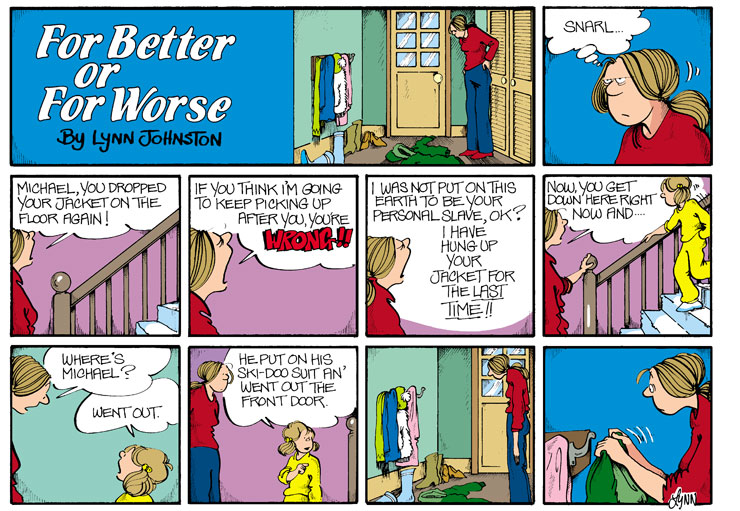 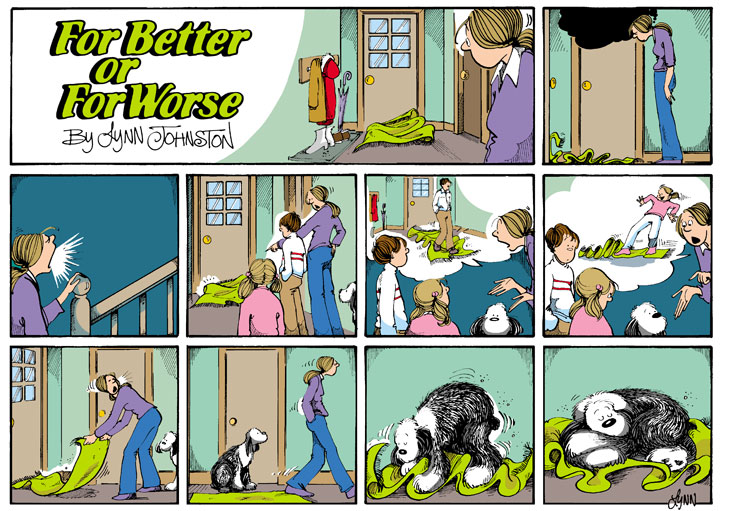 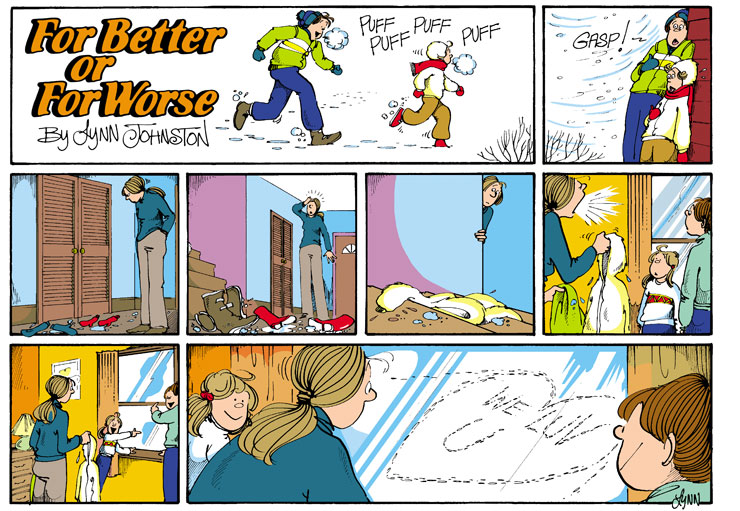 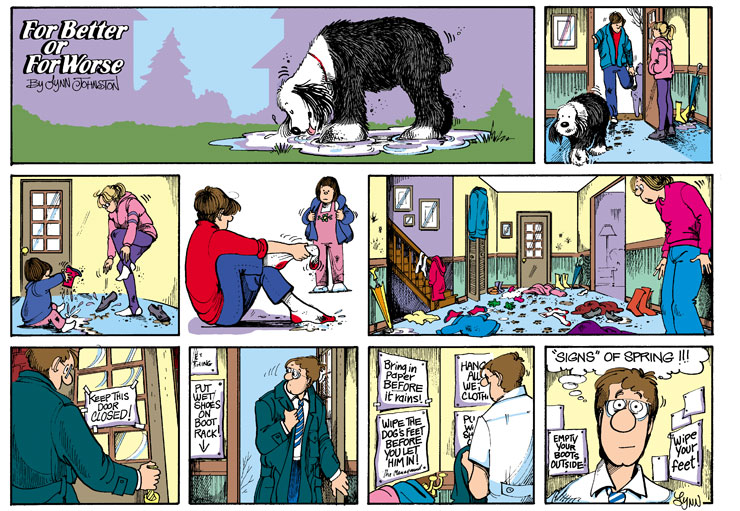 In Books: Love Just Screws Everything Up
Daily or Sunday: daily
Items: boots 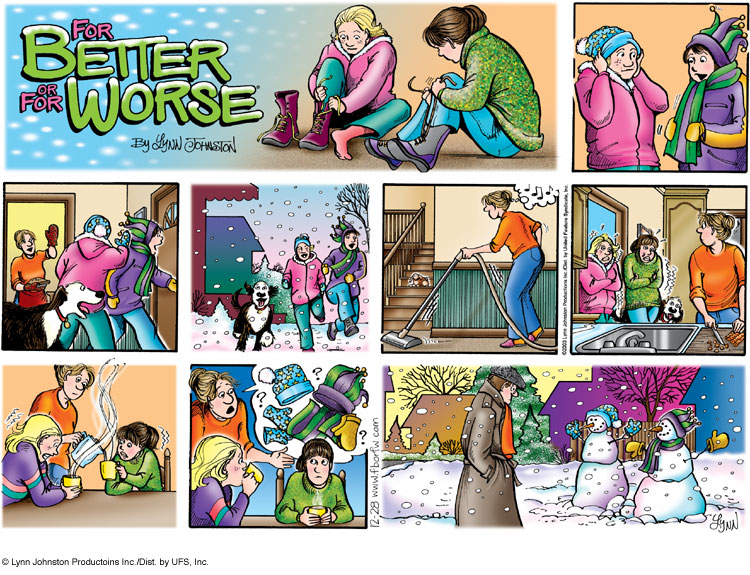 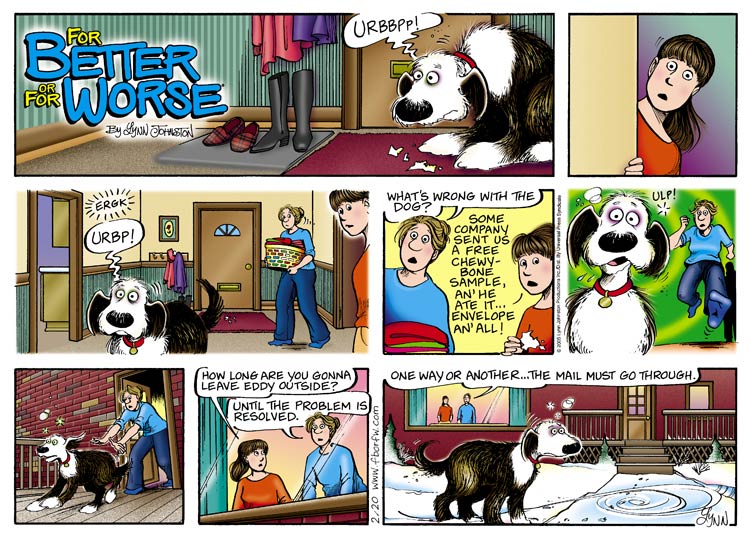 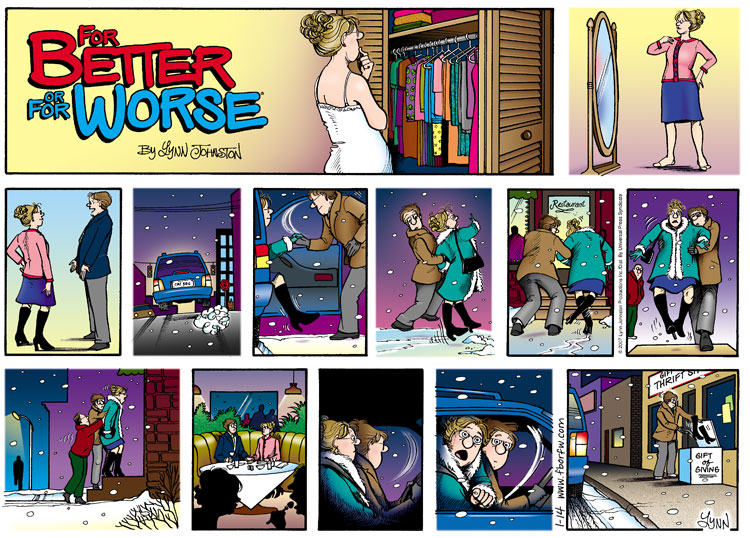 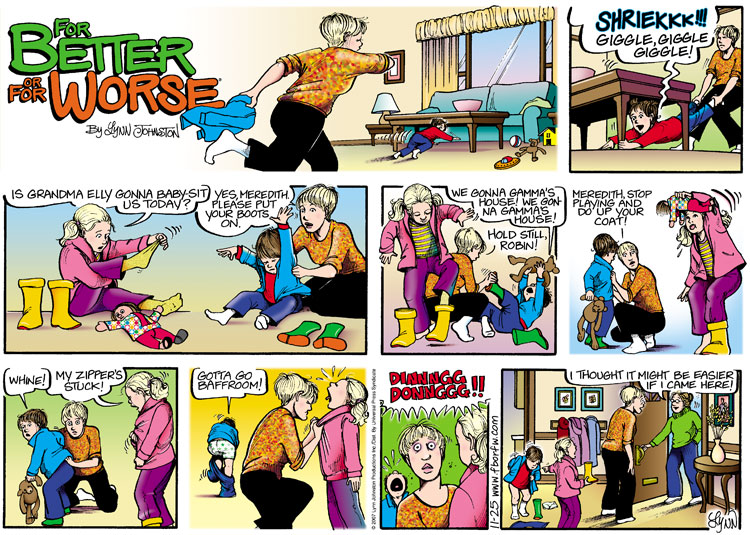 Lynn's Comments: The alcove in my mother-in-law's house was too small to allow for an organized dropping of outerwear. Likewise the closet in our front hall was a "bin" you dove into head first hoping to find something that, if not matching, at least fit! Along with the jumble of boots, mitts and whatnot came the sand, the pine needles and an omnipresent puddle of gritty, melted snow. If this cache of crud bothered you, it would be a thorn in your side for 8 months! This is how long winter lasted in northern Manitoba. You just had to get used to it. Spring would warm the roof for a few days before summer came and this is when the hall heap of winter wear would be dissected, paired up and thrown into the laundry. More often than not, we discovered things left by friends and friends of friends, which lead to the neighborly tradition of returning stuff and picking stuff up that you had left behind. Last week, I noticed that my daughter Katie, (now 33) had on a pair of mittens she's had since she was little. I wondered how they had lasted for so long - still in a pair, still wearable. Somehow, they'd survived the family "filing system". It goes to show you that favorite things find their way to the surface, no matter how deep the pile! 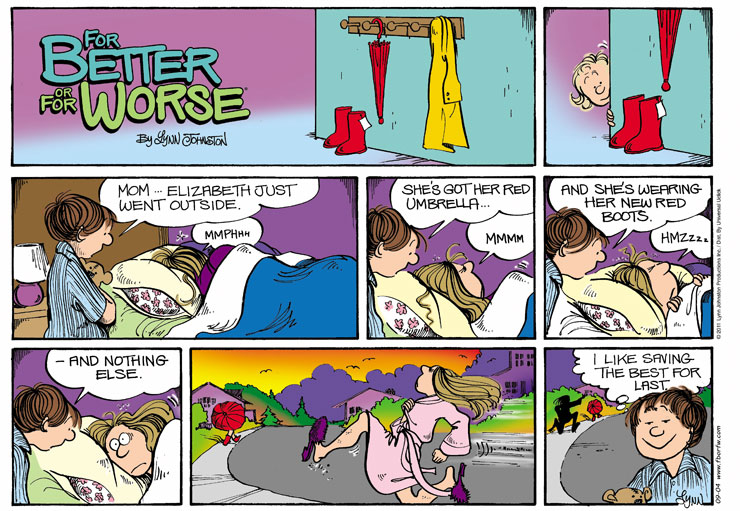 Lynn's Comments: This has to be one of my favorite Sunday pages. Aaron often came into my room early in the morning and talked to me while I was half asleep. Katie had no reservations about running outside in the buff. Combine these two elements and I had a good gag. I had fun with the illustration- most of all I loved doing the expressions on the faces of the characters. Facial expressions and body language are as important as the punch line and I erased Michael's sly smile several times before it was right on! Sunday comics like this one were fun to read when they came out in the paper. I would read this strip as if I were a stranger who'd never seen it before. If it made me laugh again then, I knew I had a good one!

In Books: A Look Inside...For Better or For Worse, In The Beginning, There Was Chaos, Our Sunday Best, Suddenly Silver
Daily or Sunday: sunday
Items: boots, coat rack, fuzzy slippers, lamp, raincoat, umbrella 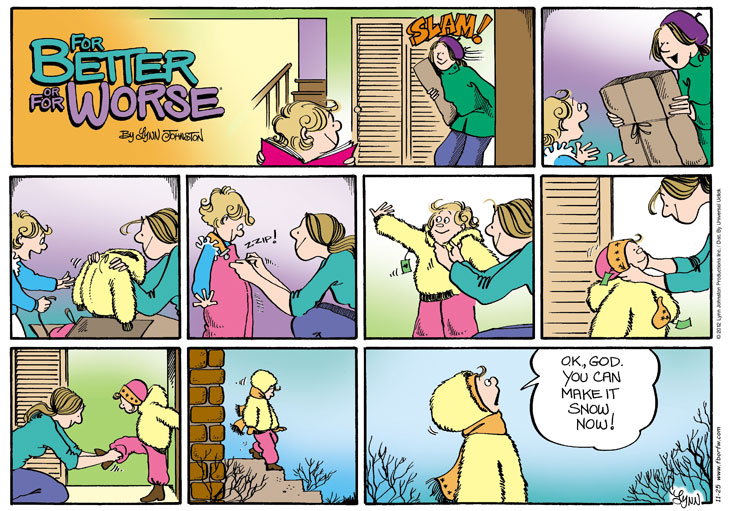 Lynn's Comments: This little snowsuit, Katie actually wore. It was one of my favourites and when I washed it, I foolishly put it in a hot dryer. It came out looking like a scraggly, matted sheep and I cried when I saw it. Kate didn't seem to notice and happily wore it until it became too small. At the time, my mother's creed was, "If it doesn't go into the washer and dryer, it goes OUT!" After this, I became much more practical. I bought things that could be easily laundered, and I made sure I was aware of her favourite things. My motto was, "If it's cute and she likes it--LOOK AFTER IT!"

Lynn's Comments: One thing I have tried to do as a doting Gram is to be in sync with the parents: to adhere to the same discipline, to provide the same healthy treats, and to not say anything critical of the parents in front of the children. I think I've scored an "A" on everything--but the treats. 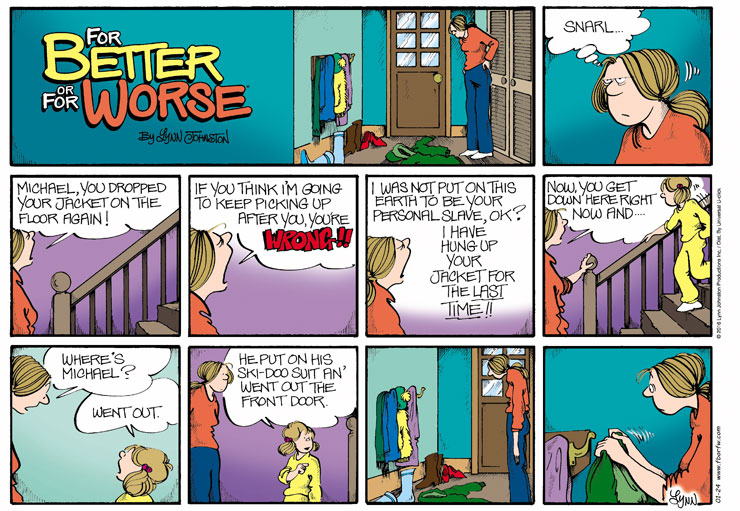 Lynn's Comments: Strips like this allowed me to vent to the fullest: to really let my feelings out. It was great to write, wonderful to draw, and then joyfully sent to the syndicate. When it was finally released in the papers, I had a chance to feel good all over again! I knew that letters would come from moms all over the place telling me I was right on track. Yeah. The strip, sometimes based on fantasy, made real life easier for me. 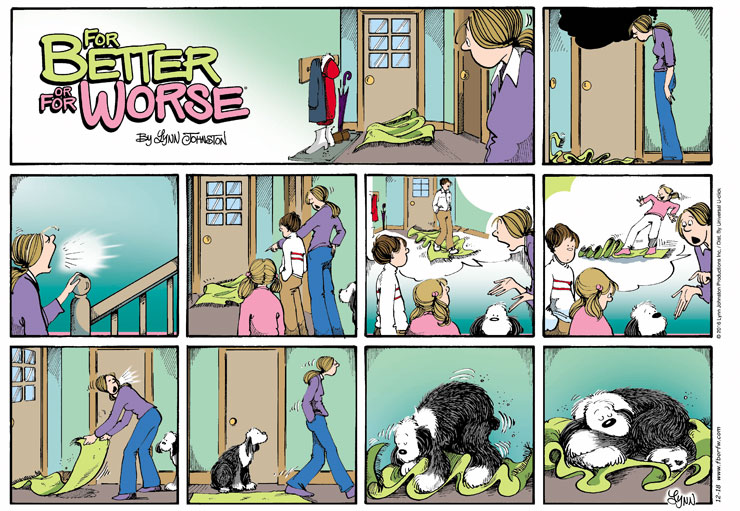 Lynn's Comments: My mom called these small annoying carpets "scatter rugs." I never really thought about it until I had hall floors to protect, then the word "scatter" made sense.