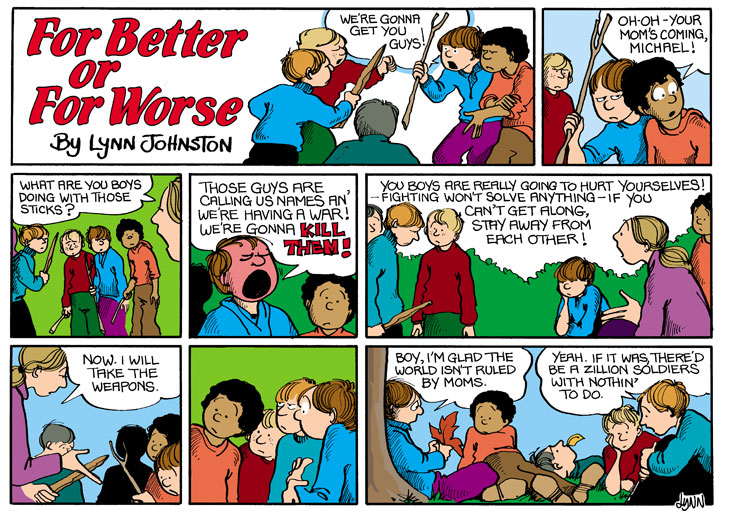 In Books: A Look Inside...For Better or For Worse, More Than a Month of Sundays, Something Old, Something New
Daily or Sunday: sunday
Items: stick

In Books: Is This One of Those Days Daddy, Remembering Farley, Something Old, Something New
Daily or Sunday: daily
Items: stick

In Books: In The Beginning, There Was Chaos, Is This One of Those Days Daddy
Daily or Sunday: daily
Neat Stuff: Gordon's first appearance
Items: gum, stick

In Books: In The Beginning, There Was Chaos, Is This One of Those Days Daddy
Daily or Sunday: daily
Items: stick

In Books: In The Beginning, There Was Chaos, It Must Be Nice to Be Little, Remembering Farley
Daily or Sunday: daily
Items: stick 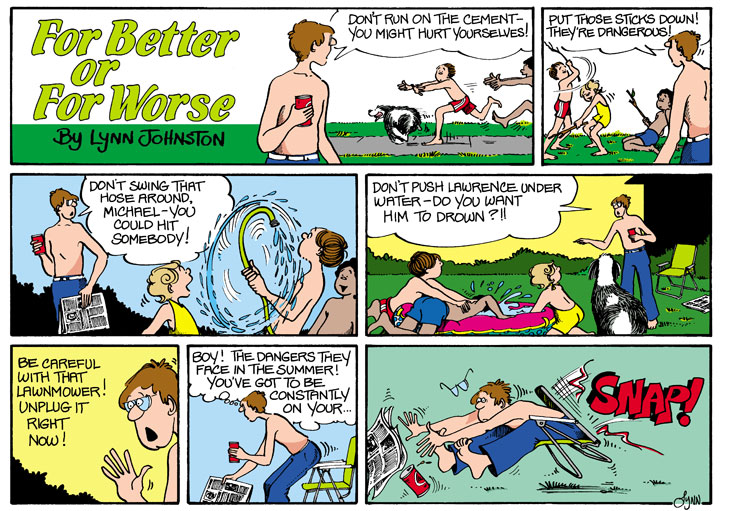 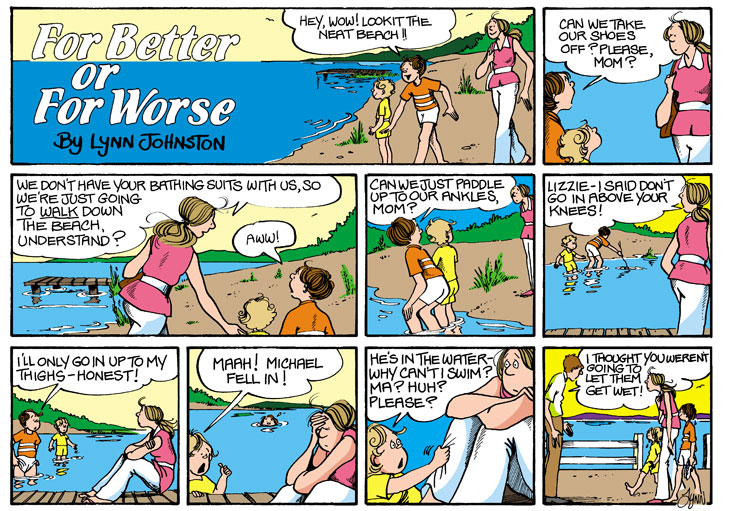 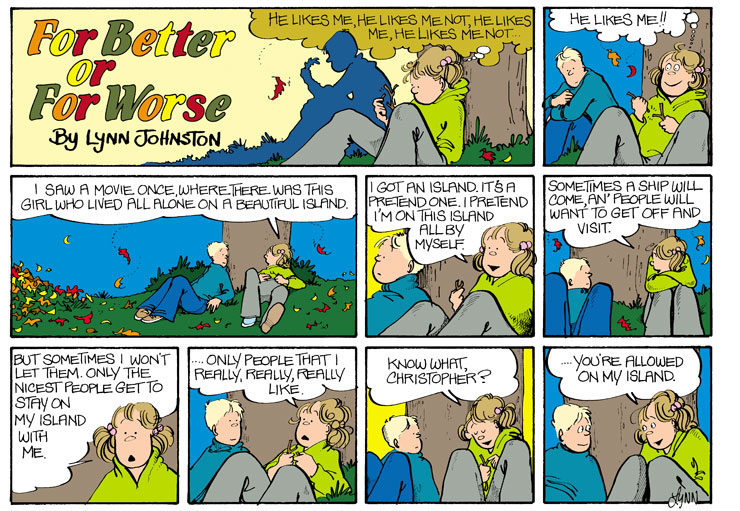 Lynn's Comments: Elementary school relationships were intense and serious. A "best friend" was validation that you had worth. Best friends gave you confidence, security and status. There was serious competition here and if a third person came onto the scene- the change in chemistry could be explosive. The old adage "three's a crowd" is never more true than in early grade school. I remember adding a new friend simply because I was offered the opportunity to use a bike or share some candy. I bought into others' friendships, too when I had stuff to share. Allegiances morphed, changed and regrouped according to the mood of the day, but the "best friend" was always at the centre of the relationship.

In Books: In The Beginning, There Was Chaos, Is This One of Those Days Daddy
Daily or Sunday: daily
Neat Stuff: Gordon's first appearance
Items: gum, stick

Lynn's Comments: The year Katie turned two, we made arrangements to go to Barbados after Christmas. My parents-in-law had set up their spare room for the children, and knowing we were leaving them in good hands made the decision easier. Ruth and Tom were strict disciplinarians but good natured and fair. Tom still worked at the mine mill, but Ruth was retired and very much enjoyed being grandma. Aaron understood the situation. He wasn't going to get away with much while his folks were gone. Had MY parents been taking the reins, however, it would have been a different story. My kids would have figured out fast that my mom was tough, but dad was a pushover. They'd have figured out fast how to pit one against another, to play on dad's sympathy and to run them both ragged. That was our game. My brother Alan and I knew how to play it - no holds barred! It was years before my parents volunteered to "babysit" my children...and even then, they did so one at a time!

In Books: In The Beginning, There Was Chaos, Is This One of Those Days Daddy
Daily or Sunday: daily
Items: stick

Lynn's Comments: As a new single mother, with nobody around to give me advice, I often turned to the one instruction manual I was familiar with: "How to Train Your Puppy". This booklet got us through much of Aaron's toddlerhood and I don't think it warped his psyche too much. He grew up to be a fairly normal adult... he still does, however, stop and point when he sees ducks.

In Books: In The Beginning, There Was Chaos, It Must Be Nice to Be Little, Remembering Farley
Daily or Sunday: daily
Items: stick

Lynn's Comments: Remember eating snow and believing it tasted like ice cream? If you don't, you didn't grow up in a northern climate! The only snow we didn't eat was yellow! 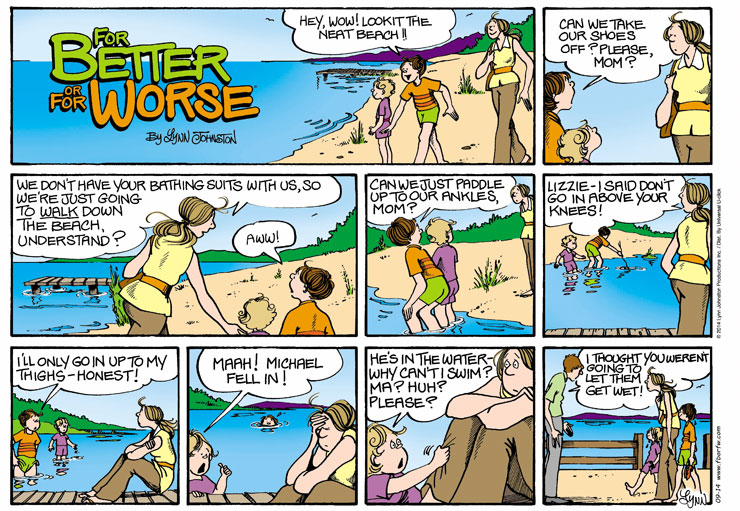 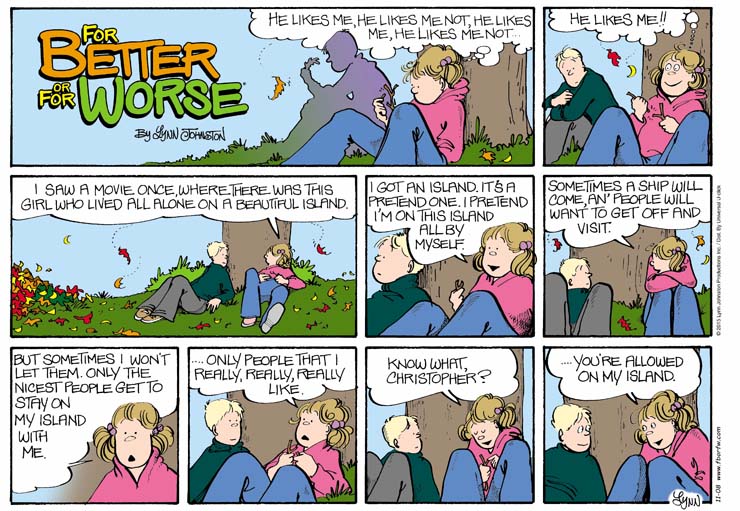 Lynn's Comments: I had such an island. I don't know if it was the story of Peter Pan or a project my mom gave us to do, but I had an imaginary island, and it was real.

One rainy North Vancouver day, my mom mixed up a paste using flour and water (and some other things), cut out flat cardboard bases, and helped my brother and me form an island in the middle of each one. We had to make mountains and bays, and when the paste was dry and hard, we coloured our islands with poster paint.

I took this project seriously. The ocean around my island was the deepest blue-green. There was a sandy beach in a rocky horseshoe-shaped bay. There was a forested mountain, and a jungle where I could pick tropical fruit. As I painted my island, I thought about how I got there and what I had to work with. A shipwreck was part of my story, of course, and I built an imaginary shack out of the remnants of a washed-up hull. I had a garden and I made a path to the mountaintop where I could watch for ships. Sometimes, a sailor or a passenger would be washed up on my shore and I would have imaginary adventures with this visitor. The visitors never stayed for long. It was, after all, my private imaginary space.

I daydreamed about this island all the time. When I was being bullied, I went to my island. When I was in trouble (sometimes for being a bully!), I went to my island. If I had a crush on a boy, he might be washed up on the island. Sometimes if a teacher was particularly nice, she might appear there, too. This fantasy went on until I was in high school! Even when I was well beyond childhood, I'd still find myself thinking, "You are allowed on my island." Or, "You are NOT allowed on my island!" It was a refuge. I was safe there. I had supreme control. There were no rainy days. It was a place of peace, and I think it helped me to survive some difficult times.