Lynn's Comments: We had owned a small aircraft ever since Aaron was 4 years old, so he was no stranger to flying. With floats in the summer and skis in the winter, our Cessna 185 was like a flying carpet--which could take us anywhere we wished to go. We all loved to fly, and even the bumpiest trips were fun.

Lynn's Comments: Aaron was eight years old when he decided that he'd like to go to Vancouver by himself and visit my mom and dad. We were surprised by his courage. Most kids his age would have been terrified of flying alone--and for such a long distance.

Lynn's Comments: This trip was quite an adventure for all of us. I preoccupied myself with organizing clothes and other things he had to take--which took my mind off losing him to the great world out there.

Lynn's Comments: After about the age of 7, Aaron never admitted to being attached to his teddy bear. At the age of 18, however, when he left home for Vancouver in search of work, he called from his small, sparse apartment and said in a small voice... "Uh, Mom? Could you, um send me my...teddy?" I didn't say anything. I didn't laugh. I sent him the teddy his grandmother had lovingly made, knowing it was something he loved and needed. It sits on his dresser to this day. Aaron turned 40 this year!

Lynn's Comments: Alan might kill me for this, but as a little kid, he DID carry around a blanket. Actually, it was my blue chenille bedspread, which he inherited when the corners became twisted and grey. When it started to rot, Mom cut it up into smaller pieces so he'd have even more corners to chew on. By the time these pieces deteriorated, he was old enough to go to Beaver camp (junior Scouts in Canada), and Dad suggested he have a ceremonial blankie burning in the fireplace. Alan stuffed his remaining blankies into a shoebox. Dad put lighter fluid over the contents, made a hole in the lid, pulled out a wick of blankie, and the solemn ceremony took place. Al, with sadness and stoicism, sat and watched the box burn to ashes as Dad sat beside him with his arm around his shoulder. It was a coming of age for my brother and a time when Dad proved, beyond a doubt, that he understood kids better than anybody we knew!

Lynn's Comments: I used this same punch line again years later, and even made it the title of a collection book. You'd think I'd remember every gag and not use it again, but sometimes I slipped up!

Lynn's Comments: Yes, we did say it meant "untrained," but before he boarded the plane, we told him the truth!

Lynn's Comments: It was so hard to let Aaron get onto that plane alone. We worried about him all day. He had to change planes three times, and even though he was being monitored by friends and friendly airline staff, we couldn't sit still until he had safely arrived.

Lynn's Comments: Even now, I look at the exquisite patterns made by the clouds, and on days when the setting sun turns them to pink and purple and orange, I really do imagine that angels live within them.

Lynn's Comments: My mom called from the airport as soon as Aaron arrived in Vancouver. She said he was very sick. As it turned out, he'd noticed that many passengers did not eat their chocolate desserts and asked the hostess if he could have them all. Thinking he'd never eat ALL the desserts, they happily gave them to him and neglected to check back until he was too full to do up his seatbelt. He arrived in Vancouver engorged and miserable. My folks were too thoughtful to laugh--but we sure did!

Lynn's Comments: I thought that Aaron would be too young to appreciate the attractiveness of the airline hostesses who saw him safely to Vancouver. Not so. One of the things he told me he liked most about the trip was all the attention he got from the beautiful girls on the plane...and the jealous looks he got from some of the older men!

Lynn's Comments: Kids so often make embarrassing comments. This was one of Aaron's.

Lynn's Comments: Aaron had a wonderful time in Vancouver. He was spoiled and pampered, and if he ever felt that he was getting less attention than his little sister, he was well compensated by the way my folks doted on him. Ahhh, this is what grandparents are for!

Lynn's Comments: When I saw this in the paper, I almost wept. I had done the strip as a "bit of truth," but had no idea how serious the situation was and I berated myself for my poor mothering skills.

Lynn's Comments: My dad did take us kids fishing, but he was such a pacifist, he always hoped we wouldn't catch anything! 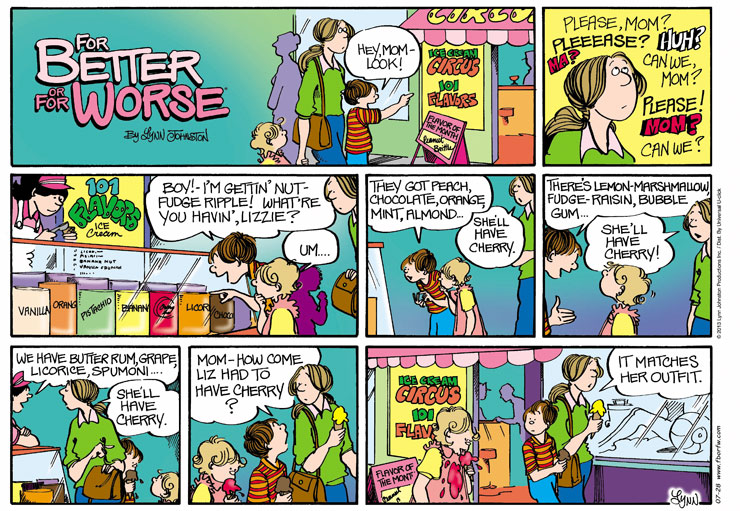 Lynn's Comments: The fish Aaron caught with my dad were not great eating, and Aaron was very disappointed when Mom dug them into the garden. For the next fishing trip, Mom and Dad were prepared. When the men came home with fish for the table, Aaron believed he was chowing down on his catch. Sometimes a white lie comes in the form of frozen fillets.

Lynn's Comments: Actually, Aaron took a bite of the fish, and after seeing his expression, Mom made him a hot dog.

Lynn's Comments: My folks went out of their way to make sure that Aaron had something fun to do every day. And.... typical kid.... he figured this was the way life should be--ALL the time!

Lynn's Comments: Even though she was the centre of attention when he was gone and even though they fought often, Katie really missed her older brother. She'd lie awake and talk about him. One night, she even asked if she could sleep in his bed.